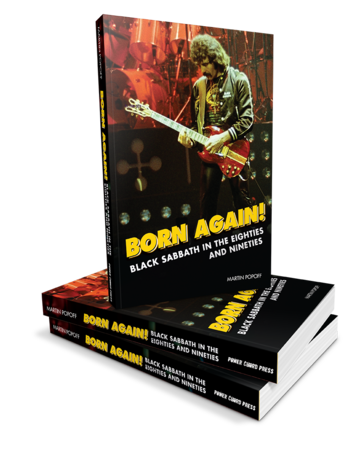 "First there was Sabotage! Black Sabbath in the Seventies, in which Martin Popoff tells the tale of the first eight Sabbath albums, each fronted by Ozzy, who stumbles out of the band at the turn of the following decade."

Now, in Born Again! Black Sabbath in the Eighties and Nineties, Popoff indulges in 119,000 words of deep-dish analysis on every record from Heaven and Hell through to the Reunion live album, which marks Ozzy’s return to the band. Included as well are eight pages of colour plates plus at the end, a handy discography.

In this scintillating sequel to Sabotage! Black Sabbath in the Seventies, Martin Popoff blows up the kaleidoscopic narrative of the Sabs over the ensuing 20 years, dissecting each and every of the band’s ten studio albums and two (and-a-half) live albums produced over that time period.

So this is the book where we hear the gripes, snipes, swipes and thumbs-up likes from Ronnie James Dio, Ian Gillan, Glenn Hughes, Tony Martin and finally once more Ozzy Osbourne, as they remark upon this institution coddled by the anchor of the band Tony Iommi, who valiantly held Black Sabbath together through many years of blood, sweat and Tyrs.

Incorporating talk from over 60 interviews conductive with band members and other relevant parties over 25 years, make no mistake—this is the most in-depth examination of the band during this timeframe ever executed. So come one and all, re-love modern-era Black Sabbath all over again—you’ll be pleasantly surprised at how much dastardly doom there is from Tony Iommi that you need to know and embrace once again."