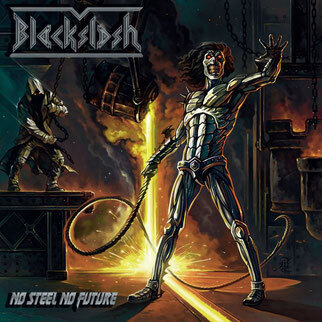 Yeah, I know, I was talking about doing an interview when I got the album, but as it was misplaced and found a bit later, now is as good :). My focus isn’t on dates and freshness anyway, good music is good music no matter when it is released. Welcome back to Heavymetal.no! Life is good?

"Hi Yngve, Thanks for inviting me to the interview. Life is good! We have already played concerts this year, were on vacation and have just a short break because our drummer becomes a father."

New album, released back in March. How has the metal scene treated the album and you guys?

"So far, the response has been consistently positive. Both the songs and the new sound by our new producer Marc Schwörer have been perceived very positively in the scene. Also at the concerts the new songs like No Steel no Future were very well received."

Are the expectations towards the promotional work fulfilled? I mean, there are so many albums released these days, it is a tricky task to get your work seen and heard.

"In terms of promotion, we already have partners with Iron Shield and Pure Steel, with whom we have been working since Sinister Lightning,  so it was the same here as with the last albums. We have several music videos on Youtube, which of course allows us to reach many people quickly. I think the best promotion is to play as many concerts as possible, our music comes across even better live than on record."

How do you feel this album, if at all, is different from your previous albums?

"The main difference from the other albums is in the songwriting. Because of the pandemic, we could no longer meet in the rehearsal room as usual. Therefore, a large part of the album was written at home. The songwriting was done by Christian and Clemens this time. This has of course also changed the style a bit, but we stayed true to ourselves and have not changed much in terms of style. In my opinion No Steel No Future is technically another step forward for us."

'No Steel No Future', kind of cheesy title, hehe, what is the idea behind it? And the cover vs the title, what connection is there?

"You should first see the even cheesier music video for the title track :). For us, the title fits the current time around the pandemic very well. The future is more uncertain than ever and for us it is clear that there will not be a future without the steel, that is, the heavy metal music.

The cover is based on the title. The meaning is about steel as heavy metal music and the cover is about steel as a raw material. In the end, it's a game with words and images and everyone can think of their own meaning. Or just label it as Cheesy and listen to the music , haha!"

You have been loyal to the metallic monster, from the Sinister lp at least, is there in any way a red line through the years of cover work?

"Yes that's right. At the beginning it was not about the monster but about the magician, who is also always on the cover since our first EP. Such figures are of course great to have a connection of the different album covers. Since this question is asked at every interview, it seems to have an effect on people and so the goal is achieved!"

Can Blackslash live off the music? If not, what kind of jobs do you have? I guess a band of your size do have gigs around, how is it combining work, family, and band?

"Blackslash is a hobby for all members. We have different professions, Clemens and Alec are teachers, Christian works in a software company, David and I are in the industry as engineers. So we play concerts only on weekends. This year we have a concert about 1 time a month. Since we recently have 2 expectant fathers in the band it will remain at this number. The possibility to play more concerts would be there, but we all agree that it is currently perfect and too much is simply not compatible with work and private life. We are still young and who knows maybe we enter the big stages all around the world when we are retired, haha."

There is a melodic touch to a lot of Blackslash’ music, not only the melodies we remember from Maiden etc., but a kind of commercial tone. Seems you take your inspiration from a varied palette.

"That's right. We all privately listen to other styles of music and therefore bring other influences into the songwriting. The most important thing for us is always a catchy chorus. I think that is also the most difficult in songwriting, the balancing act between demanding but still catchy songs! Clemens is our specialist for catchy choruses and with our double lead guitars we create a very melodic heavy metal to our taste. This is what we and our fans love!

For me it's a great compliment when people say: Yes, this sounds like Iron Maiden but still has a certain independence. And we often get this feedback!"

Today it is a new wave of bands playing classic hardrock, you guys were a bit earlier, is it easy to get gigs and attention when the number of younger bands arrive all the time? For me running a zine, it is so insane, most of the stuff I get is binned, there isn’t enough time if I tried.

"It's very good that more and more new bands are emerging and making this kind of music. Of course, in the digitalized world there is an abundance of bands available for everyone, but I don't see that as a disadvantage. Since we do this as a hobby, we are not dependent on every gig and if there is a month without a concert, it's not a big deal for us. So far we had no problems to get new gigs even if there was sometimes a break and then again several gigs in a row. A next step is certainly more difficult and without a booking agency or bigger labels difficult."

I really liked your ned album, and if stick to the commercial bit I mentioned, 'Under The Spell' was one of my fave songs. It has a real melodic Nwobhm feel. What songs do you guys like the best? And why?

"My favorite song on our new album is Midnight Fire and No Steel No Future. Midnight Fire is a song with an awesome flow and constantly pushes forward with a lot of power and is just incredibly fun to play.

No Steel No Future is incredibly fun to play live, because every listener already knows after the first chorus how the chorus goes and accordingly the crowd always sings along loudly in the chorus!"

Thanks again! I Really appreciate you taking the time to answer my questions :). Links, merch, final words, whatever, here’s a great place to burst out:

"Thanks so much for your great questions! We recently released No Steel No Future on vinyl in multiple colors. Very cool stuff that can be purchased on our homepage . Feel free to check out our store there!

See you on the road!" 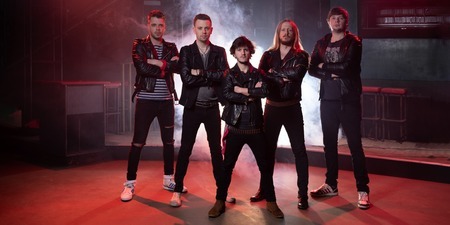