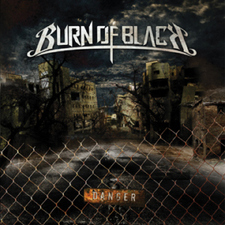 Kind of odd seeing you present yourself as a thrash-alternative band :) I found more hints from the powermetal scene (real power ala Savatage/Metal Church/Riot anno 88-89) and a solid portion of late 90's bay area thrash. Thoughts?

"Well, for sure there are a lot of different influences coming out mixed in our music. Probably, in each song there are different traces left from our 5 different background. The way we present and categorize ourselves is what we feel about us and the path we started to take. But we couldn’t reject nor deny if somebody feels more hints different than thrash itself."

And what can you tell us about the band? Origin? Members?

"The band has been through many changes, upsetting it more than once and completely differing from the initial steps. It was born basing on more traditional melodic and gothic metal sounds. The rebirth took place in summer 2011 as the three left members (Alberto Lemoni the drummer and the two guitarrists Marco Piva and Alessandro Finesso) really felt it was time to begin something bigger, from a different standpoint.

On the way to start and pursue something ambitious and important, the joining of the bass player Sylvia Fabbris and the singer Giacomo Cordioli put the the whole band on the same line: recording an album. The recording sessions went on during live gigs, in which the band consolidated its union and its identity. The beginning of 2013 has brought another change: the leave of Finesso and the introduction of Alessandro Bassani. He immediately fit into Burn of Black dimension, feeling the band, the music and perfectly integrating and improving the general output. As of today, the line-up is stable, solid and full of projects and aims."

I often feel some bands never should have made full albums, and that some ep-s or min albums like the one you have released, is a healthy dose. But in the case of Burn Of Black it was the opposite; I could easily manage a full lenght album, and I was keen on more when the last track ended. Do you guys have a full album? Or plans to make one?

"The choice of making an EP album was on purpose. Due to the fact that the line-up was very recent, we did believe that some of the songs we already had could have been a good business card to a bigger world. Above all, we realized since the beginning that the kind of mixture we were putting together was not properly usual. So, we wanted to test the creature that was coming to light during our rehearsals.

The general feelings around the EP are basically showing a common line: there is plenty of good inputs and ideas which can turn into really good stuff. Proved this, we are already on work for our full length, which will probably take a significant time, as we do not want to leave anything to the case. We believe that great results can be only achieved by deep studies and researches of sonorities, plus seeking the best cohesion through the potential of all members. The first full lenght album by Burn of Black is then already a scheduled project."

The bandname, what's the meaning behind? Burn Of Black? Evil stuff? Or just some hard assed metalness? :)

"We admit it: there hasn’t been a deep research about the band name (which comes from the very first line-up and was never changed). It was something came instinctively to mind, as the members were mainly thinking about strength, toughness yet a sense of obscure. Probably there is no literal meaning of
Burn of Black, but that’s fine. We wanted to roughly shape the sense of power and consumption that darkness holds."

You're from Italy, but where are you located? And how's the locate metalscene? Any bands we need to check out?

"Basically we are all five (but the Sylvia and Alberto) from different towns. However, our logistic headquarter stays in Cavarzere, which is a province of Venice (quite famous worldwide). Metal scenario in Italy is poorer than other countries; not because there are no bands, but the genre is still considered
too out of the mainstream and limited to restricted people and social levels. On the other hand, there are a lot of bands who have already established, nationally and internationally (I think of DGM, Empyrios, Arthemis, Extrema etc) and have been doing great. So, I think metal scenario in Italy has started to change. Perhaps it will take time; but at least we are slowly showing that italian metal bands can really play metal." I have been getting some albums from Alice@Red Cat promotion through the years, and I really appreciate learning more about Italy as a musical nation. My general view ain't too positive as I get a looot of bands but very few real strong ones. Is the italian scene crowded? And why do you think so few become established abroad? So few getting out of Italy and become international superstars?

"Learning how to be big is truly not a simple thing. Therefore, what I think happens is that we might have very good singular musicians who can play really cool music. But putting together a band and a genre that works in your own country and abroad, is far different. So, you are right when you say that maybe there are too many people. But we believe, more precisely, there are too many people who don’t take this enough seriously. Getting superstars is not something you reach only by doing your homework personally; you must work entirely as a single player, but above all as a band. If that is missing, you ain’t going anywhere."

Some words about Sweet Poison? Is it a pro-label? Perhaps your own? And beside through Red Cat, how do you promote the band? Both national and abroad.

"We just started with Sweet Poison and we’re happy with them. The biggest fear all bands have is to be labeled by someone but then getting anything but being present somewhere in a single webpage at the 150th place of a long list. We feel that this label is promoting and pushing the EP and the band itself.

Besides the great help and connections of Red Cat, we manage to be present on all main channels that people use nowadays for music and information. We put particular attention to our website and we’re actively present on all main social networks (Facebook, Twitter, Youtube etc). We think that a band should accept the fact of becoming its own manager. In a way, it is also challenging. Also, due to the relationships our drummer Alberto has, as he’s endorser of Stocco Drums, Diril Cymbals, Silverfox and Attack, plus Skin Marker, we are advertised and will be on some magazines, nationally and
sometimes internationally (e.g. La Casa Del Batterista, Drum Set Mag, Drum Club)."

What inspires you? Bands, books, films? And are these inspirations reflecting in the lyrcis as well?

"Well, the biggest inspirer is the world around. An artist is the one who picks many things coming from every day’s life and turns it into a form of art. I think that the current world scenario offers a looot for thinking and writing.... But (at least for now) we’re not kind of rebels and rioters writing and screaming against anything that moves and breathes.

Our lyrics and sounds tell about ordinary feelings and situations which everyone can live. But should we identify a constant factor, we could say that it all
revolves around uncomfortableness and instability."

Not the most exiting cover I've seen, but it was ok. Any particular message behind it?

"As first and debut album, we didn’t want to define ourselves with a particular artwork or logo. We just wanted to delineate this sense of uncertanity of what there is behind. So, the choice of a creepy, dark and undefined view, was made on purpose to launch this Danger."

And what do you know of the norwegian music scene? Or the country in general?

"Honestly, we don’t know that much about Norway as country. But I always hear that it’s charming (even if oftenly snowing :)) However, from an artistic standpoint, for sure we know well some of the greatest most extreme metal bands (e.g. Immortal, Mayhem, Darkthrone, Dimmu Borgir etc). So, when I think of Norvegian music, I always imagine deeply emotional music, more oriented to extreme and dark feelings, but very passionate and touching."

Thanks a lot for your time, I really appreciate you taking the time to answer my questions. Any final words, heres the spot:

"Thank you for the interview and for the interest in our work. We hope to have other chances to chat and look forward to coming to Norway and play some gigs there."