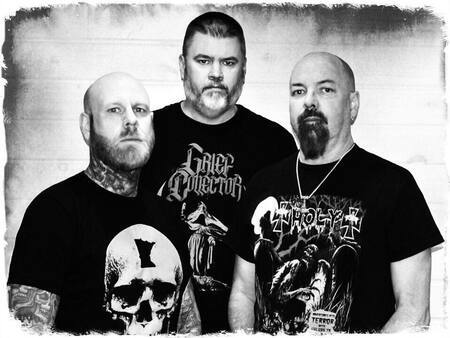 Welcome to Norway, welcome to Heavymetal.no :) Life’s good? Or maybe, with you guys, gloomy? :).

Brad: "Life is good, now that we’ve survived what seemed like an endless winter 😂."

This trio is a pretty recent one, as I understand the kickstart was back in 2017? And it was just you two for two years, Brad and Matt? No vocalist?

Brad: "And yes, Grief Collector started out as just Matt and I in October of 2017 as merely a recording project. Our idea was to have one singer on each of the five songs, since they represent very different emotions. We looked around locally but didn’t find a good fit. I realized I was friends with Robert on social media, so I reached out to him. And the rest is history as they say."

And Matt, you’re listed as the string king, what’s the reason you haven’t secured someone to release your duties? I guess the live aspect is taken care of? If not, kudos ;).

Matt: "For the most part it’s just because it’s something I love to do, that is playing both guitar and bass, writing parts, coming up with something on bass that is supportive of the song but then goes off into it’s own world for a while and then comes back to lock in with the drums. It’s a lot of fun for me to do that.

For live shows, yes we will have another guitarist and bassist. For writing and recording I think I will be doing double duty until the band is able to break out a bit more and our budget can support more involvement from other players. Sometimes it works to have multiple writers and sometimes it’s best to have just couple people fulfill the writing duties. It can go both ways and both ways have its pro’s and cons. At this time with Grief Collector it is working well with the 3 of us working it out." 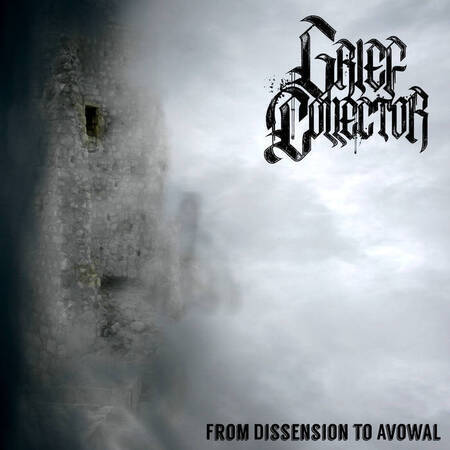 How come you entered the doom world? What bands triggered your love for the heavy stuff? ‘Cause Matt and Brad, you’re not that old… and as my research shows, you did time in bands not into doom prior to grief Collector.

Matt : "I’ve listened to music my whole life since I was a little kid. Heavy stuff  goes back into the ‘70’s for me. #1 heavy band from that time of course is Sabbath but the list of heavy bands for me would be anything classic from Maiden , Priest , then into the ‘80’s Megadeth , Metallica , Pantera . I draw influences from all kinds of music. I prefer melody in vocals so for Doom Metal, Sabbath , Trouble , Type O Neg (kinda doomy), Solitude Aeturnus , Candlemass ."

Brad: "I grew up listening to bands like Black Sabbath, Judas Priest, Kiss, Iron Maiden and stuff like that. Black Sabbath was the first band that ever gave me goosebumps. The songs really spoke to me in a way that other bands couldn’t.

And as I got a little older, bands like Candlemass, Pentagram, Solitude Aeturnus, Cathedral and Trouble really hit home with me emotionally. Doom had always been something I listened to, but never really played until I formed Among the Serpents in 2013. That band ended in early 2017, and I had a small musical hiatus until I started Grief Collector. "

Same goes for you Rob, back when you started out, was it the usual suspects, Sabbath, Trouble etc.?

Rob: "It's a toss up between Black Sabbath and Trouble. My first experience with the darkest music, was when I was 12 and discovered Sabbath's album Master of Reality. Metal Blade Records released Metal Massacre 4 in 1983, with The Last Judgement by Trouble on side 2. And I was like That's the shit right there. Trouble really got me in to the doomier side of music.

I started the band Graven Image, which was more like Mercyful Fate. Lyle Steadham, who was also in the band, ended up meeting John Perez. Lyle called and said We need a singer"(for Solitude Aeturnus). I told him I don't sing, I play guitar, but basically that was it."

Doom has become a trend the latter years, where we have seen the genera broken into a lot of different subgenres. What are your thoughts on this aspect? Is it a good thing when bands take the classic doom and add different vocal styles, metal styles, and broaden the doom world?

Brad: "Ya know, I think genres can sometimes become stale and stagnant. I honestly like when bands have the guts enough to try something different. Grief Collector is one of them in my opinion. We definitely have elements of Sludge metal and straight forward Hard Rock. As musicians, I think exploring new horizons and being creative is of the utmost importance."

Grief Collector is classic doom, the way I like it. Heavy, simple, working class, the Trouble effect on the guitar tones, the vibrato on the vocal. It doesn’t need to be tampered with I feel, compared to food, why the sushi and the fancy stuff when meat and potatoes works? :)

Matt: "Thanks, I feel the same way that It does have a classic doom vibe to it with being more modern sounding as far as production goes.

I spent months working on guitar tones for the album. Tweaking and making changes, experimenting so they were heavy and hit like a ton of bricks.

As far as effects go, when effects are used, I tried to make sure that the effect would add to the overall feeling of the songs vibe and the subject matter of the lyrics. So sad sounding wah harmonies crying out, a few times we used a phaser effect to create a trippy sounding guitar that would add to the emotion of the song. With 5 songs covering a very emotional subject matter we felt that we wanted to give a full presentation and listening experience and used some effects to enhance the sonic and emotional experience. I have found that when I crank the album on headphones it is very common for me to get goosebumps. Something about it that just takes me away."

You guys are unsigned, isn’t that correct? Do you need a label? Do you seek a label at all? Or is it a matter of DIY?

Brad: "We basically did everything ourselves minus some of the mastering. We definitely would love to get picked up by a label for our next album. So we shall see what the future holds."

What topic(s) is/are the foundation of the lyrics? And is this an important piece of the band? Or is it the music running the show, and the lyrics’ a necessary evil?

Brad: "From Dissension to Avowal is based on the 5 stages of Grief. With each song representing each stage. For us the lyrics speak from the heart on a subject that we feel everyone can relate to in some way. The music just brings those words to life."

These days. Compared to the 80’s and 90’s, the number of bands is insane. It is difficult even for a killer band to get some recognition. How do you promote the band? How do you work to get some grief out to the people? A management? Promoting agency? Word of mouth?

Rob: "We self promote. We have to because of the way the industry is these days. Anybody can do anything from their basement. You have got to wade through the sea of music that's out there on Spotify etc. Somehow you have got to make yourself known.

Also we've got management and people in the business working for us. It's a collaboration – grassroots promotion. You no longer have the great record companies throwing money at you. Most bands have to scrape up money to do it on their own.

We're serious. We do what it takes, but for the love of the music. We do it because it matters, it's something of the soul. "

What kind of feedback so far? Are the listeners and the media appreciative to your doom metal?

Rob: "As for the feedback from the Grief Collector album, the fans are amazing. They are calling it Classic Doom. We're very appreciative of their patronage."

Your favorite doom band(s) ever? Just to dig into your inspiration for making this album, and why Grief Collector sounds like it does.

Brad:  "For me personally, I am a huge fan of Black Sabbath (all eras). As well as Candlemass, Trouble, Pentagram, Saint Vitus and Solitude Aeturnus. But we definitely have some sludge elements in our music like Acid Bath, Corrosion of Conformity and Down. "

Thanks a lot! I really appreciate you guys taking time out to visit Heavymetal.no, Any final words? Any links, someone in need of a digital punch, perhaps someone helping the band and in need of a shout out?

Brad: "We would like to give shout out to Gro Anita Meling for bringing this all together. And to everyone that has bought the cd and the kind words from around the world. Cheers!"