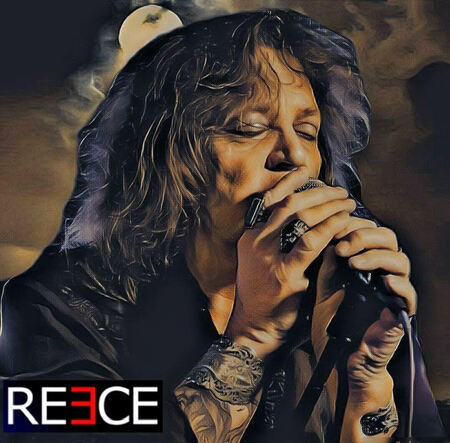 It’s a pleasure having you here David, life’s good?

"Yes lifes very good and thank you for the opportunity to speak with you and your readers!"

It’s been some years since I followed your musical steps, I tried to stay updated a while in the post-Accept years, but I never managed to keep up. You’re pretty much remembered for your part in the Accept history, but man, you have a solid discography 😊 What are you doing these days? Beside doing the Eat the Heat celebration? I know Saint And Sinners is doing an album on the Mighty Music label?

"I'm currently promoting the new Sainted Sinners album, Back With A Vengeance, that will be released Febuary 16 2018 on El Puerto Records."

I was into Accept back in 82, I believe, and when 'Eat The Heat' came out, it was never a big deal that the band had a new vocalist. Udo was on his own, and the band delivered a solid release. How was it to accept (!) the lead role for the band back then? Man, you took on some horns on some big bulls 😊.

"It was an incredible challenge nowing Accept! Being an American and learning the German way of life was difficult, plus replacing such an iconic singer like Udo. I feel that my accomplishments on the album were the very best I could deliver and I wouldn't be here today without that opportunity."

I know you’re ready for Norway soon, in May, and we’re talking the 'Eat The Heat' album in its entirety? That’s correct? Or do you add some stuff from your other bands as well?

"Yes this will be my first time performing in Norway, and I feel that doing Eat The Heat live is the right thing to do! That album was never given the chance to be heard, and I've been asked for many years to do this, so I'm very excited! I'll also add a few Accept classics in the show." How was it when the band, Accept, and you, decided to end the partnership? Was it a heavy metal hammer in the head? Or did you stay focused, heads up and just start looking for other musicians?

"The end of our relationship was terrible to be honest, but I picked myself up and went to L.A. and formed Bangalore Choir and got a huge recording contract in less than a year. I recently went to see Accept live, and they put me on the guest list and was nice to see them."

I red somewhere you did some albums, or maybe a couple, with Larry from Vengeance Rising? I love the band, what did that sound like? That’s quiet the odd partnership?

"Yes we had a heavy group called Sircle of Silence. Larry is an amazing player."

Beside Accept, if we scan through your releases, what band(s) would you like to be remembered for? I guess the Germans and Bangalore Choire are the most famous, the bands most people attach to your name.

"I did some time with Bonfire,the album Glorious which sold greatly and toured heavily. But that part of my life was a shit experience mainly because Hans Ziller is a terrible person to work with. I am very proud of Sainted Sinners though."

Who are the musicians doing the Eat The Heat tour with you?

"I'm using different players in all territories, its amazing! Spanish people, Italians, Germans and Swedes - all amazing artists and people, will be blown away by their talents!"

And just for curiosity’s sake; did you have any problem from any management, members of Accept etc. when you launched the idea to do this?

"No problems at all with management for this I'm grateful."

It’s very popular for members and bands to tour with a specific album these days – many of these getting labeled desperate, money seeking, nostalgic old timers 😉. A rather tough question, what were the ambitions for you to do this? Was it purely from a musical aspect? That the world needs to get the Eat The Heat songs presented live?

"As I said Eat The Heat is a great album, and fans as well as myself need to hear it, and I need to perform it."

Any final words, anything to say to the fans, those buying tickets t the Norwagian shows, and to those sitting on the fence being skeptical?

"I AM THANKFUL SO VERY THANKFUL TO PERFORM IN YOUR COUNTRY! I'll do my best to rock everyone, and if your curious; come out and rock!"