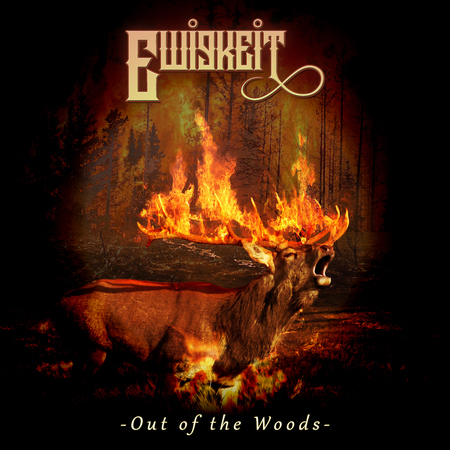 I have been a fan of Ewigkeit for a while, especially the last two albums really made me realise James is a person of talent. Recently he released an ep, which marked him leaving In The Woods... and for him to focus on Ewigkeit and Nattehimmel, amongst other bands/projects he is active in.

Fo rme, this is the last time I will focus on the split between the vocalist and In the Woods... as well, burying the past and looking forward I feel is the right move now. So, James, now your journey through the woods and beyond are done, over, is the ep a solid halt from you and your past with In the Woods…? Clean slates, forward focus…? The cover may suggest it is?

I had fun at the circus, but eventually even clowns become boring... However, If people want to hear material like the OLD In The Woods... (the demos and debut album), they should check out Nattehimmel, which is the new band of myself, the Botteri twins snd Sven - such a great feel of something old, but also new. I'd say its a mix of Heart of the Ages era and a bit of other contemporary Norwegian releases, like Emperor, Gehenna and Dimmu Borgir. Vocals are a mix of Epic Doom and Black Metal. The album is being mixed right now - very pleased with this stuff !"

Check out an interview with Nattehimmel HERE .

The three songs, they were intended for a Woods album. Do you have any more songs from this period?

"When I was told there would be a new ITW album (??!!), i wasn't really interested too much in continuing with ITW anymore, because there were many things that had made me dissapointed. Furthermore, Cease the Day was written to be like the last chapter of the band, to put it to rest. However, i still wasnt 100% sure at the time (early 2020) of what to do, so I sent 12 demo songs i had recorded that didnt have a home and were lying around, unused on my hard drive, to see if Bernt and Anders thought any could be used for ITW. They chose 5, but eventually only recorded 3 because the drum kit was sold halfway through recording the album. After waiting 18 months (the whole period of the covid crap), I eventually recieved their contribution of 5 songs, and at that point decided - once and for all - that I was done. However, it seemed a shame to let my material go unused, so I decided to put it out under Ewigkeit (my oldest and most varied music project), as it didn't fit my other bands, and Ewigkeit is constantly changing anyway. The songs i write that eventually see the light of day, in one band or another, are those that are not relegated by new songs I do. I actually currently have way too many finished compositions (mostly without vocals). If I told you how many, you wouldn't believe me,so I won't."

The cover was very cool, the colours, the fire, who made it?

"I design the majority of single / EP / album covers of my releases myself - i had found a few different pictures that conveyed what I wanted to say, and fitted them together. It took a while, but i was quite happywith it. It features the same deer as on the cover of Cease the Day. In that album, he appears to have wandered very far from the Woods, and ended up in the decayed city streets at night. For Out Of the Woods, the deer has wandered back to the woods, but found it to be on fire and in a state of disarray and destruction. The burning woods actually cause the deer to be set on fire, so he runs away."

What kind of feedback have you received on this ep?

"People like the music amd are really positive about what is, in essence, a very negative release. Evergreen is personally my favourite track and other people seem to agree on that. That song is about when I moved to my new home in 2020. The garden was nice, but dying. The reason was that there were some northern pine trees that had been allowed to grow way too much. The thing is, with these trees, is that they crave the sunlight so very much, that they kill the lower part of themselves just to get higher. So you have dead branches of brown leaves all the way up, but the tops of the trees are a deep luscious green. However, the ground all around them is virtually dead, because they suck all the water out of the ground, and life out of everything else. There was only one solution ; they had to go ! So, as some tree surgeons I hired were chopping these trees into small pieces and feeding them into the chipper, I sat there and wrote the lyrics to the song Evergreen. Sometimes ypu need to sacrifice what appears from a distance to be perfectly OK, in order that you can give life to other things." 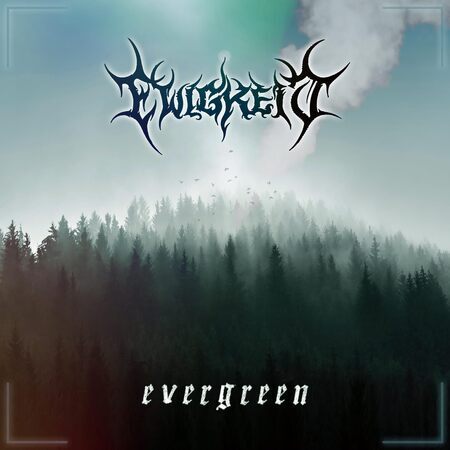 Read my review of the ep HERE .

Naturally the ep won’t get a tour, gigs, and the back story of the release suggest it isn’t more than a last gasp, a final breath, do you feel it isn’t too important what commercial success it achieves?

"Commercial success?? I couldn't care less about that! I'm happy to just keep working on new music and seeing what new ideas come to me. If the only reason that the Out Of The Woods EP serves is as a) a diary of some of the more negative experiences over the last 6 or 7 years and b) stops other people from stealing what is my intellectual copyright, then it has achieved its purpose! Still, Metallica ripped of Megadave, so who knows..."

Why did you choose to release it under the Ewigkeit moniker? And did you on any stage toy with a release under another name/band/project?

"Hmm - well, Old Forest is more Black Metal, so it wouldn't suit that project. Nattehimmel is too new & positive to be infected with the negativity that accompanies those songs. Jaldaboath is a (soon to be ressurected) joke band with lyrics about tits and farts and none of my other bands would suit those songs - the closest fit is probably Ewigkeit. I've concentrated mostly on conspiracies and aliens recently, but I've done more personal stuff over the years under that band (the album Land of Fog, for example). It wasn't too much of a stretch to fly it under that flag."

I really like Ewigkeit, especially the last two albums. What can people expect from you regarding this in the coming months, years?

"For Ewigkeit specifically? I am mostly releasing stuff that is either conceptual or stylistically more adventurous. I've pretty much given up on albums for that band now, as it is quite confining. I think it's mostly going to be digital singles & EPs. Perhaps an 'album' will be cultivated from the nest of the EP material at some point.. who knows.

As for other music, we are putting together the final touches to the debut album, Old Forest have 2 albums nearly completed and I have a new project with my friend Kjetil Otterson called Qadmon. The music is mostly his compositions, which were unfinished, and I have helped complete them and add vocals. Very strong material indeed (in the style of Anathema and Katatonia). There are obviously even more music projects being worked on, but I don't want to bore you with too much. Thanks for the support!"