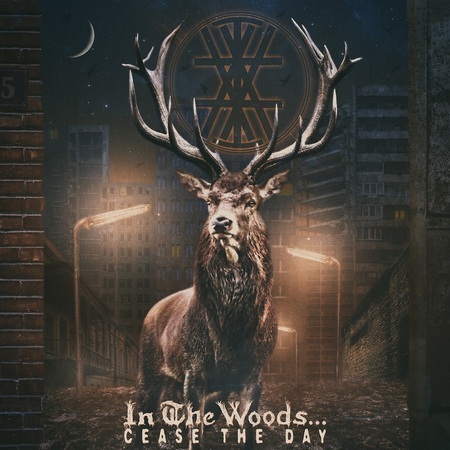 The release of Cease The Day marks the second album with you behind the mike, still as cool as it was in the beginning? Or has the love faded some, and the cream pie is now a hot dog with mustard?

"I have a lot more confidence in what I’m doing as a vocalist now. I never really considered myself as a vocalist before ITW – I just recorded vocals for other bands as it was necessary – so being a part of ITW has had a knock-on effect of contributing to my vocals in all my projects now.

It has really helped me playing gigs and finding my own sound, which had always previously been limited to studio recording."

What are the ups and downs with you being located in the Uk? And would you prefer the members to live closer?

"I don’t think it’s a good thing for people to live in each other’s pockets – this is why bands split up a lot of the time ; familiarity breeds contempt, and absence makes the heart grow fonder."

Woods has a following, with your delivery on 'Pure' and this new album, do you think they are pleased? What kind of feedback have you been getting from the fans during the tours, concerts?

"I have had nothing but positivity from fans of ITW – I have had people say that they were initially worried because they didn’t know what to expect with my vocals, but that I surpassed their expectations. I’m guessing that these were people who didn’t hear the recordings we made, because I think my vocals are more than adequate, especially on Cease the Day. I’m very confident in my vocals these days – as long as you know your limits, you can accentuate your strengths.

Whereas Jan K. Transeth’s vocals relied more on theatricality, I come from a background of composing on many instruments and so am perhaps more centered on melody. Neither is superior, it’s just different."

The band is perhaps getting more extreme musically, considering where they ended up on the albums prior to the split back in 2000. Would you like the band to go even further back in time? To become even more extreme, like the debut?

"Personally, I hear a race to escape the extreme metal background from the debut to Strange in Stereo. To be honest, I’m not a fan of that album (SiS) – it is too self-indulgent for me. I think the balance we have on Cease the Day lies somewhere between the first 2 albums, and it feels right. As musicians we have all individually explored the more mellow and progressive aspects of rock and I think where have all reached a point where we are not ashamed of our roots, and are embracing them once more."

How was the process on recording the album? Did you ever meet up with the guys? Or was the music shipped back and forth through the internet?

"I took a trip to Kristiansand, recorded some ideas in rehearsal room with Anders (one of which we actually used on the new album – Transcending Yesterdays). Also on that trip, I was introduced to Bernt and after keeping in touch with him I suggested to Anders that we try writing some music with him – it worked out really well. Me and him wrote about 50% each of the riffs, and then he came to Brighton and we recorded some basic demos and arranged the songs. It all came together quite effortlessly."

I really like your other band, Ewigkeit, do you regard this as a side project? If both bands would grow big, how would you make your priorities? And what’s happening with Ewigkeit as we speak?

"Ewigkeit has a special place because it is through this project that I have developed in many ways as a musician, and experimented a lot with different styles. Without Ewigkeit, there would be no Old

Forest, Jaldaboath, Bombs of Enduring Freedom, Svartelder, Orcrypt, BlackSmoke, Meads of Asphodel or even the last 2 albums of ITW."

There isn’t a lot of cash in a band like Woods I guess, is it a struggle to get the ends to meet on keeping the band on the tracks? I know all about this, I’m spending a great deal of money every year from my own wallet to keep Heavymetal.no alive, but hey, it’s a love for metal and hardrock :)

I have a day-job that pays my bills – I’m not expecting any money from music. I’ve done a few things that have made good money, but they are too irregular and far apart to have any stability. I’m pretty careful with money and am hoping to be in a position where I am able to
devote a greater amount of time to music in about 5 or 6 years. Maybe I’ll be too old to be relevant by then ? I don’t know – but music for me is a serious hobby, not a job."

I love the cover, both the image, and the fact that it will kill when getting printed on merch stuff. What’s the story behind this? And is it in connected to the title In any way?

"It’s an idea I had when writing the lyrics for Empty Streets; the stag represents the wild, untamed origins of the band venturing into a modern desolate landscape. That’s the basic idea behind it. I think it’s a test whether or not a band can escape their name and transcend it’s meaning. For instance, do Iron Maiden even remotely write songs about medieval torture devices ? In the same way, I would like to think that, with the last 2 albums, people don’t expect In The Woods... to be a Norwegian Black Metal band writing songs about forests – we are so far from that, it’s quite funny that people still expect it."

You’ve been living the album for a long time, as is usual for the band/it’s musicians, how do you view the album now, right before the fans are ready to hear it for the first time? Has it changed in any way for you during the time from recording and release?

"The more I hear it, the more I like it. Honestly, I think it is a better album than Pure and equals the debut for me. ITW have had many strong moments, but I think Cease the Day is consistent throughout, and perhaps the strongest album yet."

"The first 3 (Empty Streets, Substance Vortex and Respect my Solitude)."