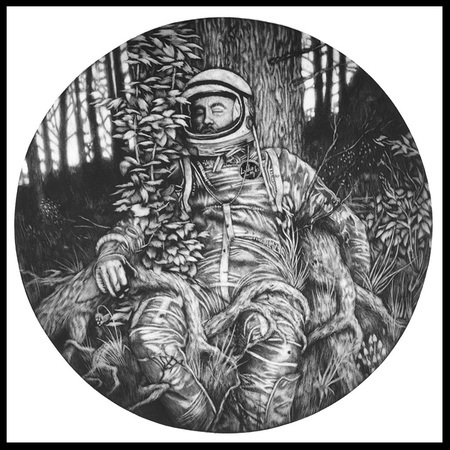 "...anticipation is high for Lydia Laska's long-awaited second album. Fittingly titled Ego Death, this is the sound of Lydia Laska becoming both brasher and smoother, rougher and more come-hither, swaggering and silky: a truly unique sound that can take over both radio and squats alike. Indeed, life has been that much rougher since the release of Krankenhaus, and the band's sonic influences are even more varied and violent this time. Knowing beforehand that the stakes were high, Lydia Laska chose to record Ego Death with esteemed producer Emil Nikolaisen (Årabrot, Todd Rundgren, Serena-Maneesh)."

"So, are you prepared for Lydia Laska and that very Ego Death? Will you step forward into the gutter, only to be splashed with sonic slime that will never wash off? Questions, questions..."

"Lydia Laska hail from Stavanger and Oslo, Norway. Forming in 2002, its members come from a diverse musical background, including (but certainly not limited to) the early black metal scene as well as prog/krautrock, punk, and good ol' rock 'n' roll.

The band's recorded debut came in 2006 with the White Trash Attack EP, and was followed by two more EPs - We're Nothing Compared to Ourselves (2007) and Could I Have a Go On Your Girl, Please? (2009) - but it wasn't until their debut album in 2010, Krankenhaus, where the Lydia Laska aesthetic truly took flight. A devilishly dark, boldly bewildering, but above all perversely catchy sound emerged, drawing in such disparate influences as the Velvet Underground, Faust, David Bowie, Royal Trux, The Stooges, and old-school black metal.

Not long after its release, Krankenhaus went on to be critically acclaimed and served as an admitted prime influence for fellow hybrid-benders Kvelertak. Continuing that momentum, Lydia Laska soon became notorious for their chaotic live shows - to the point where they actually had to stop playing gigs since they were generally banned from most venues.

With the stage thus set, anticipation is high for Lydia Laska's as-yet-unnamed second album. With the sonic influences even more varied and life being that much rougher since the release of Krankenhaus, this second Lydia Laska album looks set to be an even-more-kaleidoscopic stroll through the gutter. Both brasher and smoother, rougher and more come-hither, swaggering and silky, this is a truly unique sound that can take over both radio and squats alike. Are you prepared for Lydia Laska?"