Klar for festival i Hallingdal 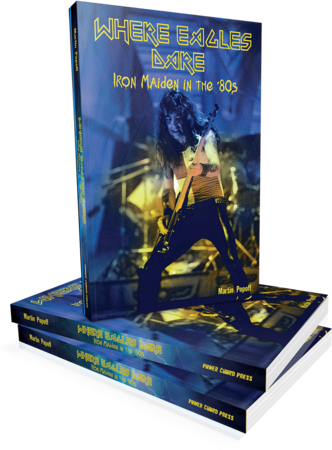 Where Eagles Dare: Iron Maiden in the ‘80s teller 288 sider, og som Martin påpeker, "...with my usual tipped-in sections of colour photography, every song examined deeply and all that. You’ve all been very kind in making my recent books like this on Sabbath and Priest sell pretty damn good, so this one is very much a style match to those."

In Where Eagles Dare: Iron Maiden in the ‘80s, now three-time Maiden author Martin Popoff celebrates the band’s golden period, with a mischievous cheat covering the fascinating ‘70s roots of the band en route to The Soundhouse Tapes and the first flash of a grin from green ghoul Eddie.

Utilizing his celebrated album-by-album, song-by-song approach, Martin deconstructs the band’s first clutch of classic of records - Iron Maiden, Killers, The Number of the Beast, Piece of Mind, Powerslave, Live After Death, Somewhere in Time and Seventh Son of a Seventh Son - in fan-fanatic detail, with his usual detours into cover art, production, looks at lyrics, the ins and outs of the band’s landmark live shows and all manner of minutiae, using specific dates at every twist in the tale."

"So what are you waiting for? Join Martin for a galloping, twin-lead celebration of the only band to escape from the NWOBHM into hallowed halls of gold and platinum, integrity intact, mission unchanged now 40 years later and still going strong!"