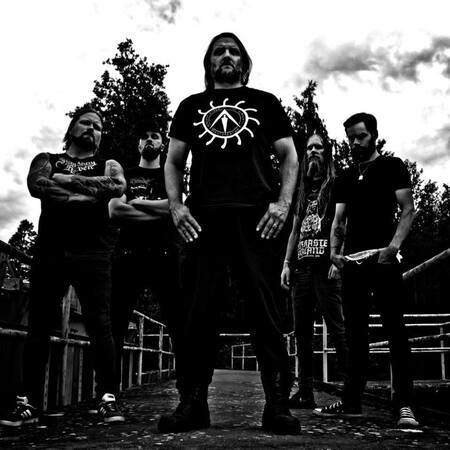 Halla, and welcome to Heavymetal.no, the most stubborn metalzine in Norway :). Life’s good?

Karl: "Yes life is good in this world and the one to come."

I’m listening to your album as we speak, and it’s pretty rough stuff. What made you guys choose the extreme alternative?

Karl: "You do not choose metal, metal chooses you. Like for Jonah the prophet running the other way won`t do you any good only delay what is meant to be, and the detour may not be pretty, you may be swallowed whole, go down to the abyss just to be spit up where you were supposed to go. If metal has chosen you there is just a choice of acceptance or misery."

And your musical inspiration? Is it equal extremes? Or do you have any soft spots?

Karl: "Spots of every kind. Don´t tell us that it is not obvious when you hear the album: that you deal with a bunch of soft hearted, hardheaded romantics?" 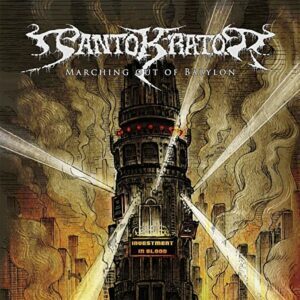 Album, check, promotion, check, tour, live, not check. How was it to do an album and failed to follow up with live activities? Covid made an impact.

Karl: "Time is not up yet. In the meantime we just draw the bowstring back even more for a harder impact."

The bands history, could we get a fast-food version? When, albums, members?

Karl: "By talking to the first members lately I found out that there are at least four different origin stories of this band, so let’s stick to the things they all agree on: Pantokrator was formed about 5 weeks before Lucia (13/12) 1996 by: Magnus, Mattias, Karl, Tobias and Henrik at the ages of 20+ down to 14.

We released a tape in 1998 when I was in exile in the military and a demo cd in 1999 or 2000 when Mattias was in exile in Umeå, a thousand kilometres away. After this we recorded our first Ep released in 2001, with no label. This is when the babies started to come and we lived in 3 different parts of Sweden.

In 2003 we released our first album Blod, recorded over time in three different studios with gigs between to finance the next day of recording. On the release gig of that one we asked Jonathan to handle the bass on one song so that Jonas could play the violin, he has been with us ever since, but on guitar. With the completed band we have recorded a promo in Kalmar 2005. A few songs for A Decade Of Thoughts in a studio in Huskvarna with Uffe Blomberg, and also Aurum in a studio in Halland, they were both released in 2007. After that it took us until 2014 to record and release Incarnate - recorded at home except for vocals - and finally Marching Out Of Babylon our first completely home cooked album released in 2021 . Between Incarnate and Marching: gigs, tours, singles, building a sanctuary for rehearsal and recording, marriage, more kids. A lot of life to live."

And are any of the members active in other bands?

Karl:"I am active in Melech together with Ricke and his Lady. I have also written lyrics for other bands and projects."

Jonathan: "I also play in Skogen."

Ricke: "I play in Melech and Crimson Moonlight and my solo project Jachin ."

How is it to be a Christian band in the metal scene today? And do you think it’s easier today versus some years ago, with the more intense tabloid satanism?

Karl: "Nothing that can not be handled. Nowadays I think the opposition would be from those you think they are good rather that those who like to be evil, given that the notice us. We have already been called fascists after releasing We the People, and at least I expect to be called all kinds off  -ist and -phobe in the days to come, whether it be for new stuff or songs 20 years old. There are just so many basement-dwelling keyboard warriors out there ready to cut down whosoever will bend the knee, repeat the newspeak talking points, use the right hashtags and or the proper profile pic filters.

One aspect of the Christian faith is the idea that truth and such things as right and wrong are not a changing thing. If it is right/wrong now it was always so and shall ever be, it is not an issue to be voted on or be decided by popular view. This way of seeing the world does not sit well with secular humanist postmodern thinking. To be more clear and honest thinking does not really sit well with secular humanist postmodern thinking. I am personally abhorred to see in recent years the evil bands of old assure that they are not evil in any bad way, not in a way that could hurt anyone's tender feelings, not any one that matters at least."

And as you’re a Christian band, what better than a co-op with Nordic Mission 😊. How did the deal come about? Was it the label or the band making the first move?

Karl: "It was kind of a two way courtship, or that is how I like to remember it. Melech (⅖ of the band) had a deal with Nordic Mission first and we liked who they think, how they work and what they valute."

And is the main scene for Pantokrator within the Christians metal scene? Or do you do a lot of gigs and interviews all over?

Karl: "Yes mostly within the Christian scene, however that is not by choice, our MO is to play where we are welcome, those who ask us. so to everyone out there that arranges gigs and such: ask and it shall be given, seek and ye shall find, knock and the door shall be opened."

And promotional wise, has the label lived up to your expectations?

Ricke: "Over the top, words can’t describe how grateful we are."

Musicians living with songs and recordings for many months, even years, may get tired of the material when the album is released. Was this the case with Pantakrator? Or is the album sounding fresh and alive for you guys today?

And the band, any fave track(s)?

Karl: "Marching Out Of Babylon, We The People, Phoenix Rising. I stop there because it gets weird if I mention all eight songs."

Ricke: "Phoenix Rising and Marching Out Of Babylon."

Jonas: "We’ve got that question a few times and I have had different answers to that. In the beginning I think my favorite track was We The People cause it’s got so much energy and suited well with the feeling of releasing a new album. As for now I’d say The Last Cheek."

Any bands we should check out? Love me some suggestions :).

Karl: "I will focus on the Christian scene here since I don't think I could mention any secular bands that you do not know of.

Crimson Moonlight, Melech (of course :-)), Sacrificium, Antestor, Skald In Veum, Drottnar, Symphony Of Heaven (a band coming into its own, new album coming up ), Brotality (very young boys playing metal the old way) IHS, Reverorum Ib Malacht. And if you ever get fed up on metal listen to Woven Hand and Jachin."

WH is amazing, saw them live back in 07, after following 16th since abround 96.

I really appreciate you taking the time to answer my questions, sorry for some delay, but I’ve got two jobs paying my rent, haha, metal don’t. Any final words, links, merch, someone in need of a mention?: