Om skiva: "Its diverse sound defies categorization while delivering a blend of aggressive attitude, emotive expression and modern flair, garnering a range of stylistic comparisons from classics like Suffocation to modern heavy hitters such as Despised Icon and Decapitated."

"Get ready to enjoy all the madness!"

"Formed in 2013, Across The Swarm's exhilarating brand of death metal and charged live shows have quickly earned them a reputation as one of the most exciting acts to emerge from the Italian metal scene.

The group's complex and dynamic sound along with their resonating live performances helped the band quickly rise to prominence. Following the release of their self-titled EP in December 2013, they took to the road sharing the stage with acts such as Fleshgod Apocalypse, The Modern Age Slavery, Electrocution, Hideous Divinity and Hate.

In 2016 the band released the Waiting for the Hyenas single to considerable acclaim. It wasn't long before they caught the eye of Time To Kill Records who welcomed them to their roster."

Bandet: "Projections is a journey between light and shadow. But you don't exactly travel in the middle, you continuously oscillate touching extreme peaks and awareness of being. It’s a journey through dark compromises. It is a continuous search inside and outside of oneself, so that everything is always renewed, being born and dying a little, day by day, accepting and sacrificing the human being.

Projections is our second release under the name Across The Swarm, an album that brings together all our influences in seven tracks full of straightforward and aggressive death metal supported by an important groove matrix. We focused on a compact album, with songs based on linear structures boasting several parts that could not exactly be labeled ‘death metal’. The recordings (by Domination Studio - San Marino - Italy) and the mixing and mastering (by Steve Wright of Wrightway studios - Baltimore - USA) focused on a clear and sharp sound, but it was important to retain a warm and human feeling". 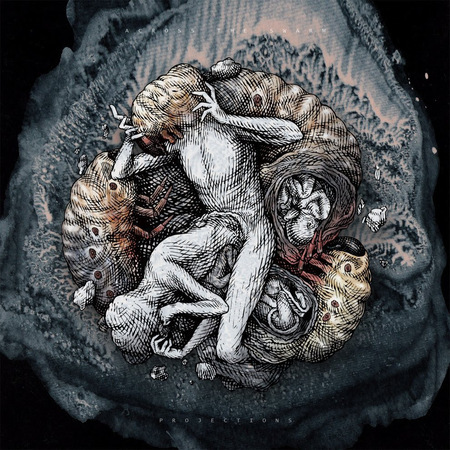