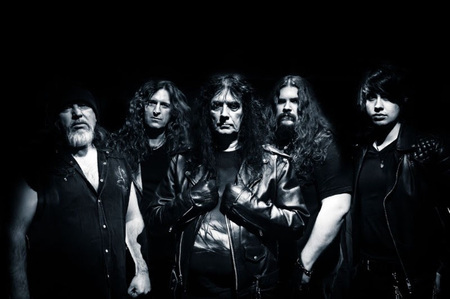 "Blitzkrieg formed in 1980 and besides the legendary album A Time Of Changes from 1985, the band is known for the close connection to Metallica. Metallica recorded the song Blitzkrieg on the 1984 Creeping Death single plus the 1998 Garage Days Inc album and has performed the song on a regular basis live.

Blitzkrieg's latest album is Back From Hell from 2013, which was released both in Europe and in Japan. Blitzkrieg has been touring actively the last years with a new strong line-up, playing festivals like Sweden Rock, Metal Days and Hammer Fest. On top of that the band has toured both South America and Japan.

Blitzkrieg  are currently writing material for the new album and will be entering the studio in the late summer of 2017. The first single is expected to be released in late 2017 and the album in early 2018."

Brian Ross, en av grunnleggerne av bandet, sier: "We can't wait to get started on our new album, which we should be doing towards the end of the year. This is a new, fresh start for the band in many ways."

Michael@Mighty Music: "It's means a lot to me and Mighty Music to be able to sign bands I loved since I was a kid and one of them is Blitzkrieg. We will be working hard on getting this band up in the major leagues of heavy metal again where they deserve to be".