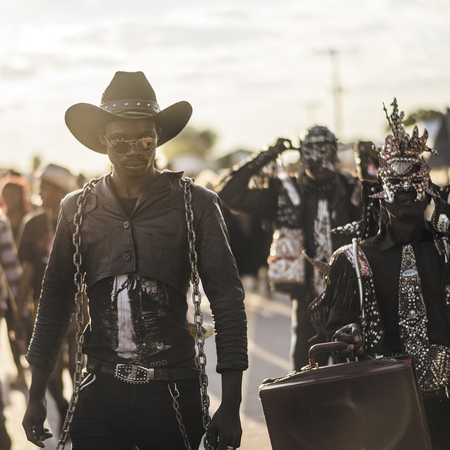 Svart Records, together with the makers of the documentary Freedom in the Dark, proudly bring African Metal to the west!

"Botswana in Southern Africa is a country roughly the size of France, with Kalahari Desert taking up half of its surface area. The country is perhaps more famous for Bushmen or the diamonds found there in the 1960s than its music. It might be hard to believe that the country has a very lively and unique rock scene. Rock culture in Botswana is distinctive in many ways; the passion for playing music is more important than unnecessary technical prowess. The rockers also dress in very imaginative ways, and their clothing ranges from metal uniforms, leather and rivet wings to different kinds of masks. These aspects together make the scene in Botswana one of the most interesting in the world today.

Rock’n’roll arrived in Botswana between the late 60s and early 70s. The Okavango Delta located in the northeast of the country is one of the world’s most diverse safari areas with rich flora and fauna that attracted adventurous Westerners to Botswana. When visiting, Western tourists brought music with them and what would happen next was irreversible. The locals also adopted other aspects of rock culture when Western tourists brought them band t-shirts and leather jackets as souvenirs. Soon Botswana, and especially the town of Maun located at the river delta, was full of tough looking – and tough playing – rockers.

In the early 70s a band called Nosey Road was formed. They were the first band in Botswana to compose original material. Founded by the Sbrana brothers, who had originally arrived in Botswana from Italy, the band mostly played fairly light hard rock. For a long time Nosey Road was the only rock band in the country and it took about 20 years before the second one was formed in the early 90s; Metal Orizon. Metal Orizon combined local rhythms and folk singing with growling and electric guitar. These two bands are cited as the biggest influences by virtually every local rocker, to the extent that they are referred to as the grandfathers of rock.

The arrival of the television in 2000 along with the spread of Internet marked a more active era in Botswana rock’n’roll. Wrust, the country’s first death metal band, was formed then. The band also played abroad and shared the stage with e.g. Sepultura and Carcass on their South African tours. Wrust’s heavier approach inspired many young metalheads, and as a result, many new bands were formed; e.g. Stane (2005), Crackdust (2006), PMMA (2008), and Overthrust (2008).

Overthrust describes its music as old school death metal and it is one of the most noted metal bands in the current Botswana scene. In addition to countless local shows, the band has also played the Wacken festival in Germany in 2016 and have toured Europe a few times. They also host Botswana’s largest metal festival Overthrust Winter Metal Mania which gathers funds for orphan children.

The songs on this compilation were gathered during the making of the documentary film Freedom in the Dark between 2014 and 2017. As of writing this in 2018 there is roughly ten active bands in Botswana and more or less same number of bands that have called it quits. Due to the fact that it has been and still is difficult to record music, especially rock, in Botswana, many bands haven’t been able to record their music at all. This compilation has been culled from what has been possible to produce on record.