Wow, this was quite different from the majority of the bands I work with. Do you strive to be different? Was the goal always to separate yourselves from the crowd?

"Our goal is linked to storytelling, content and depth. For those to come true, image and the textures of sound became not only important but a inseparable part of Calatrilloz, and thus, we became different from others. It's not like we want to be different, it's just the only way bring it out in full definition, the composition the visuals, the show, the story."

And sorry for my lack of manners; welcome to Norway, and welcome to Heavymetal.no :)

"Thanks brother, we really want to pay a visit. Give you a live taste of us."

What do you know about the Norwegian scene? Any bands you like?

"I won't quote names, I will quote a concept. Norwegian bands go that extra mile, weaving a concept story, which goes beyond the songs. The visuals the videoclips, I vouch for that. I don't want to see the normal guy next doors writing songs about his girl, I want to see fire spewing behemoths announcing a new prophecy. Show me a world beyond."

Back to you guys, and the recording I got from Gordeon. It really exited me, the reason I gave it an 8,5/10 was due to the amount of tracks. Is this it? Three songs? Or does it exist more music, perhaps we can look forward to an entire album?

"Nay, that would be unbearable for me. That's hardly a chapter of a section of the Calatrilloz history (the three songs). It's the same argument again, we are an audio visual band, and we were releasing singles with videos to start the rumours about this great new thing. As one knows budget is tight, and videos can be quite expensive, so we made a call. Let's single this out in the beginning and as soon as we have some interest coming to us, we announce our grand project. Our first concept album. Well, they will all be concept albums, we do have a story to tell. A DVD with audio and videos.

Openings, interludes, 7 more songs and an artwork to match the content. Something you will want to keep and read over and over again. Yes, read, the Cd will come with with a very special leaflet." 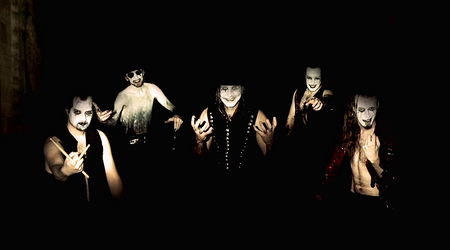 Calatrilloz, what does it mean? Its one of those names I have to concentrate when typing ;), but I guess it is a reason for choosing the name?

"For me to answer that question, I will quickly introduce the story. Zahyin (myself) is a time traveller that saw the end of the world, and races against time, literally, to change the future, yet for purposes unknow, he gathers a band of misfits and rejects, all balancing between good and bad, to help him in his mission.

Z created then Calatrilloz, a travelling circus family, performing while in the hunt of the answers, forever adapting to the ages it performs into.”

I caught the theatrical vibe, have any of the members a past in this kind of setting? Theater, musical?

"Indeed it is thus. I have a background in theatre and classical singing, and with the concept of opera in mind, ( full blown arrangements, storytelling and dramatic music) , I brought Calatrilloz to life.”

I also picked up on the prog-factor, and I found a slight presence of Jethro Tull in some of the material. You agree? If not, what kind of prog do you fancy? What bands do you like and draw inspiration from?

"Definitely, the question and answers on the instruments, but not only Jethro Tull, but also a myriad of seventies bands, like Zeppelin, Pink Floyd. Not prog but amazing Black Sabbath, Deep Purple (a little prog) and of course nothing more progressive than Verdi, Mozart, Bethoveen, Puccini etc..”

Does it exist any official release(s)? I got these trio of tracks burned, but this might be the choice when doing the promotion...

"I will confess I hardly know what an official release is, much less the need for it ;-). We are going fast and steadily in the underground scene, inches away from the mass media, and all I can worry now is about spreading the word of my family (Calatrilloz) as far and as much as I can. I use the singles as cannon fodder, and our real gold is a) the live shows, he'll for the other bands, and b) the soon to come video clips and storytelling shorts.

The members are preforming as characters, using makeup, stage design, costumes. I guess you are more into the live shows than doing studio albums? With this kind of music I'm sure the stage is the best way of presenting the songs anyway..thoughts? 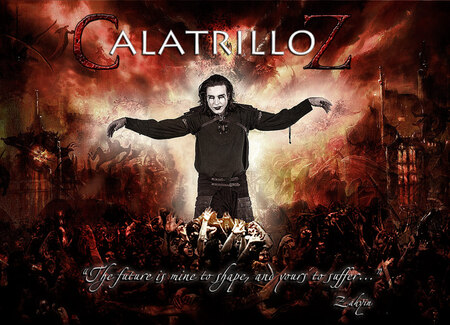 "As before the gold comes when we have the budget for the songs videoclips, and for the enhanced live shows with attractions, live string quarters, actors, midgets, strippers. Think circus de soley, putting the band as the main focus, or a metal opera, in extravagantly designed sets. And the videos, the story behind Calatrilloz, on cartoons, movies, everywhere. Broadway?nay, a travelling circus, a party till 10 am in the morning when at two in the morning the band jumps in.

The band has played in various settings, gothic, metal, pop and jazz, where do you feel most comfortable?

"Gender less crowds. I want a blank canvas to work with, I want a crowd that wants diversity."

Is it any message within? You have any agenda; political, religious, historical?

"Aye, there is indeed a message. A hidden intent to rally the mass toward good.

The songs lyrics are metaphors for bravery in front of enemies, righteous revenge, faith in good and in the punishment of evil. Calatrilloz will lead from the front. As the enemy gather, and their numbers surpass, one can trust us to stand ready. Never back down. Better a glorious death than the life of a coward."

Thanks a lot for your time, hopefully there will be more exposure in the future. Any final words? Anyone you want to slap or give a hug? Someone important to the band in need of some spotlight?

"Yeah, I want to slap musicians. It seems nowadays everyone wants to be a session musician, and the only commitment they hold true is the ones attached to money. Every project needs support, and what no one needs are arseholes who can't keep their promises. May your souls rot in hell, you shall have company. It's full of traitors.

We have promise around us, if any of those come true, next time they will be here, on the forever brothers in arms list.

Promote your mixtape at ReverbNation.com