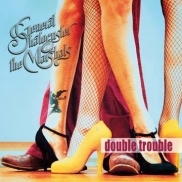 First off, thank you very much for the album, its rare to receive such a strong album these days, with such a strong 70's influence, and performed this good!

Jack: "Well, Thank you! It's always nice to receive such compliments! There is a lot of hard work behind Double Trouble, but we are all glad how it came out... I do not usually listen to records I have been singing on, but with this album I'm more than happy to put it in the car stereo!!!"

Second; welcome to Norway! There are quite a distance between us, but thanks to the www we're basically neighbours :) Life's good?

"Well I guess, it's like this. I have been only once to Norway. It was for a Rock Festival with the Tygers of Pan Tang in 2008 if I remember well... Good ol' memories... having breakfast with Twisted Sisters..."

I know, my review was posted rather late, but Heavymetal.no has been down due to changes within the staff. What has the album achieved since its birth? Have there been bookings, interviews and interested parties during the time since the release of Double Trouble?

"The reviews have been so far very good. We are pleased people from all over the world seem to have understood our music, our influences, our on way of interpreting the sound of the '70... We have been doing some gigs in Italy and we are pleased with the reaction of the audience to our set. We play songs from both our albums, with just two covers: CCR's Fortunate Son and Walking The Dog by Rufus Thomas, but people seem to enjoy our songs, specially What Are You Looking For and Alone."

And wow, this one hit me hard, and I do a LOT of reviewing! The only negative aspect I pointed out was that there were a couple of slow songs too much, I really got crazy when you guys turned up the heat :) What kind of feedback has the album received? What does the reviews tell you?

"As said, so far we have received just one bad review from a German web-zine, so we are very very happy. I know that the album turns a little bit mellow on the second half, but we all agreed on the songs to record. We have been lucky enough to chose from a big bunch of songs that were almost ready. In hindsight, a rock number would have made the track list more fluid, but perfection it's not human, as you probably know!!!"

I am a heavy fanatic Nwobhm. collector, and I'm really embarrassed to say I didn't get the link with Tygers Of Pan Tang. Whats the story behind this one? And is it a functional situation, sharing vocal duties between two bands?

"That's very bad from you :-)!!! Well I am the lead singer of Tygers since the end of 2004. I have recorded with them two albums - Animal Instinct in 2008 and Ambush in 2012 produced by Chris Tsangarides - and a bunch of Eps: Back And Beyond in 2007, The Wildcat Sessions in 2010 and The Spellbound Session in 2011. We are playing festivals this summer - Very 'eavy Festival in Holland next April and Headbangers Open Air in July - and planning a Fall tour in Germany, Holland and Belgium. The band is rocking just like never before with Robb Weir – the founder and only original member from the '80 - myself and Craig Ellis on drums, Gav Gray – from the The Almighty – on bass and the young guitar virtuoso Mickey McCrystal." As I have been using the term 70's a lot, can we get your personal favorites from this era? What bands really makes your blood boil!

"I speak for myself but Led Zeppelin, Free and Bad Company as well as UFO and early Whitesnake are still my favorite bands... but how can I forget Rolling Stones, CCR, The Who and Black Crowes, the only new band that still know how to rock and roll! I'm an music addicted and I really listen to a whole lot of stuff; I do believe a musician should always be willing to listen to new music."

Zep, Ufo, CCR, Whitesnake, Jack, you have some great taste!

What have the members done prior to GS? I can see from the photos online that its an age difference? Perhaps some have been active in known bands earlier?

"I don want to use the expression supergroup, because it's so anachronistic, but I have been singing since the mid eighties in several local bands as well as Led Zeppelin Tribute (called, guess how, NORGE, because the only Italian airship had that name), Alex and Fred Marshals (drummer and keyboard player) both play in a very famous Italian folk band called Banda Bardò while Lefty Marshal – aka Richard Ursillo – has played and a couple of seminal Italian prog bands such as Campo di Marte and Sensation's Fix, while The General – aka Fabio Fabbri – has been a well known session player through the last decades."

The production, can we get a fast food version of this process? And needless to say, I loved it! And did the finished product live up to your expectations ?

"The recording are very live, to be honest. Don't Be Afraid Of The Dark is the early demo. One take with the 5 of us all in the same room. No overdubs. You can hear me singing some fake words also as the lyrics were not complete!!!"

How is the situation on record labels etc? Is the band where it wants to be, or do you aim to grow?

"We have done two albums in 4 years; we played a couple of real good and important festivals here in Italy. We have a lot of new material already, so, Yes we are happy of what we have achieved so far. We would like to play abroad, test our music and attitude in front of a different audience. How about Norway? Can you help us?"

Italy, a country full of bands, but not too many manage to break out. If there's any justice, General Stratocuster will get some touring, making a name outside of Italy, even doing the rounds in America on the classic rock festival circuit :) Are you ready if the train pulls into your station? Or are stuff like family and work too important and hard to combine with a full blown band life?

"I'm fully into music. I'm a singer and I teach singing. I'm getting old, but if the train stop at my station I'll jump on it even with no ticket! The whole band would have no problem to accept a concrete and serious offer. I can handle all my other commitments, I'm pretty good at organizing my life."

Whats behind the choice of band name?

"The whole concept behind the name and logo it goes to the roots of r'n'r: we got the General like Elvis had the Colonel; there's the Fender Stratocaster and the Marshall amplifiers reference, and the myth of the Wild West with commander Custer, The Marshals etc... The logo itself it's an homage to The Allman Brothers Band!"

A humble thanks for your time, and for sharing your music with me. Hopefully more people will get into the band, and getting coverage here at Heavyemtal.no will get your name out in Norway at least :) Any final words? Heres the spot:

"Thank you Yngve for helping spread the word about General Stratocuster music! We need everybody's help! We love our music and we are sure there are people out there who will love it too!"