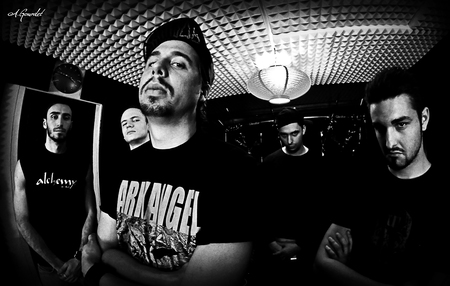 Welcome to Norway, welcome to Heavymetal.no :)

Florian (guitars): "Thanks! It is a pleasure to have this interview."

I didn’t get any infosheet, just the promo, and I always make the interviews offline :) Would you be so kind to let us know the basics regarding the biography? When you guys started out, what you have done prior to this release?

"Deep In Hate is a French Death metal band that was created in 2004 by Vince (lead guitar) and Bastos (drums). But it was only the foundations of what the band would eventually become. In 2008 the first album Only the Strong Survive was released, but the current line-up was stabilized for the second record Origins of Inequality, in 2011.¨

As for today, we are excited because the new album Chronicles of Oblivion was just released early June, while we were opening for Arch Enemy on their French tour! We cannot wait to see the feedback on the new songs!"

I don't applaude the negative stuff often seen in the metal scene, and as your cover and band name are rather shadowy, what is behind the choice of name and cover? What do you want to tell the world with the title?

"As far as the name Deep In Hate is concerned, we are talking about a state of mind : you can be living in your own hate, drowning in it, suffocating… And what kind of reaction would it bring to you? Besides, you can be trapped and deep in other people’s hate… Surrounded by hate that is not yours, in a negative world that you cannot escape…

Chronicles of Oblivion, the title of the album, refers to fictional chronicles that would relate the History of a post-apocalyptic New World… In this world there is darkness, misuse of power, hopeless future… This is indeed negative stuff, sorry about that."

I really liked your approach, this high quality and techincal death metal. Is this a term you can live with? Or is the thrash factor I can hear beneath something you want to address?

"Yes, this is a good definition, technical death metal. It changes from the usual Deathcore qualification we often get. As I always say, there IS deathcore influences in our music (if by deathcore, we mean Despised Icon or maybe Whitechapel for example) but we are mainly a death metal band.

And when you talk about a thrash factor, we obviously began our lives in metal with bands like Pantera, Metallica, Megadeth, Motörhead… And they just had an impact of everything since ! But in the end it is the death side that matters most in Deep In Hate, as you said."

Since you have arrived in Norway, what do you know of this country? Is it all black, or do you have any knowledge beyond the extreme metal scene? 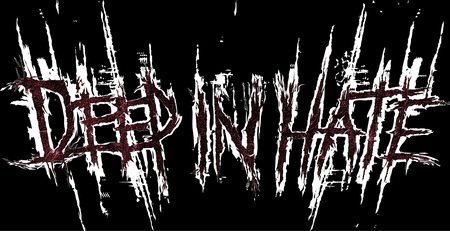 "We do not know much about Norway, and we are disappointed that it is so. We only imagine that there is a stronger metal scene here than in France, because there are a lot of famous Norwegian bands that made it out of Norway. The country is especially known for its black metal bands that everyone know about, like Gorgoroth, Emperor, Mayhem, Darkthrone, Dimmu Borgir, Burzum… I hope I am not mistaken in this short list, but what is sure is that we haven’t had so many international metal bands in France! And I think there is a lot of snow in Norway. Sorry for not knowing more about it."

Ah, as long as you don't believe polar bears are roaming the streets :) Norway is one of the richest countries in the world due to our oil, we do have a lot more to offer than black metal, beautiful nature...but it is a tiny nation, only about five millions - this is as you know the amount of people usually found in larger cities around the world :)

You have achieved a great sound, a strong production. Where did you record the songs? And was the result better than your expectations? Or was it exactly this you aimed for?

"Thanks! We recorded the album at home. For our previous album, we had invested in some recording material, and we used it again this time. We have created the DIH PROD studios, and with the help of Julien Delsol, who is also our live sound engineer, we did it all by ourselves. Julien supervised everything, from the recordings to the mix and mastering processes, and the result can be hear today by pressing play.
I think we reached what we aimed for thanks to him. The interest of doing it at home is that we could take the time we needed until we were satisfied, and we could go into the details.

We will always try to do better as time goes by, but at least for now we are clearly satisfied!"

I mention in my review that the drum sound was both organic and a tad digital, was this a goal for you? I love when bands of this techincal and detailed kind really manages to get all the parts across. A balanced and strong sound...

"Yes, we wanted the sound not to be too cold and lifeless, yet we could not be purely organic because we wanted, like you said, that all the parts should sound clearly ! We had to find a balance between power and clarity, warmness and precision…"

What inspires you? Both musically and perhaps movies/books?

"Well, the bands that inspire us in Deep In Hate are for example Behemoth, Despised Icon, Gojira, Whitechapel, Decapitated…

Besides, we are inspired by books of science-fiction or anticipation like 1984 and the Animal Farm from Welles (in fact a great movie :) Yj). I am also thinking about movies like Brazil, Matrix… There are too many actually! Even mangas like Gunnm had an impact on the record."

You guys tour a lot? And is it any bad assed plans ahead?

"We tour as much as we can, and we had the chance to share the stage with many great bands (Decapitated, Hate Eternal, Heaven Shall Burn, Obscura, Aborted…)

We toured a lot in France and in French speaking countries, but thanks to this new album we plan on touring more in other European countries. We are currently working on planning an European tour as a main support for an international band late 2014 or late 2015, but I do not have more details for now." 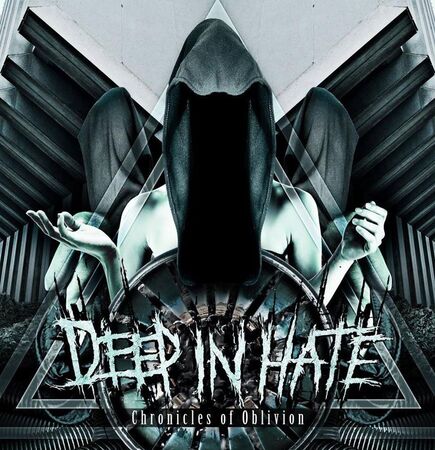 What kind of feedback has the album received so far? And are there any countries more appreciative of your metal? A specific market you're having more success in than others?

"Well, it is maybe a little too early to have enough informations to talk about this. I know we have had a lot of positive feedback in France and Germany I think. As long as people are not allergic to the deathcore flavours there are on the album, the reception is positive. But there are and there always will be people that, reading the word deathcore, will judge the book by its cover and not hear we are fans of death metal, if not anything else."

I really appreciate your time, thanks a lot! Any final words? Someone in need of a ass kicking or someone that really has been important to Deep In Hate? Heres the spot:

"Thank YOU for the interest you show in the band, and for your interview. Thanks to all the persons that have showed support and helped us reach where we are today.

Aaaaah it would be a great time to kick some asses but of course, I can’t think of anyone precisely…Let’s say fuck you all haters, the haters in the metal scene that do everything except supporting their scene, and the haters in the world that criticize those who do something… Take a look at yourselves first, and stop being haters… ‘Cause WE are deep in HATE!!"