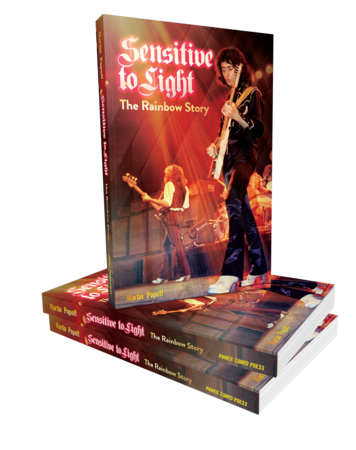 Sensitive to Light: The Rainbow Story

Martin: "Folks, even if you have my little Rainbow book from 2005, I urge you to consider this massive overhaul.

"His name is Ritchie Blackmore and his reputation is legion. But is it warranted? Find out now, as we look at the man’s career as reigning lord over the constantly evolving consortium of monster talents known as Rainbow.

And of course, there’s the music. From the raw and fiery Dio years, through the criminally under-rated Down to Earth album, the smooth crooning Joe Lynn Turner era and into one final somewhat forgotten record fronted by Doogie White, it’s all examined here, track by track, fascinating tale by trick.