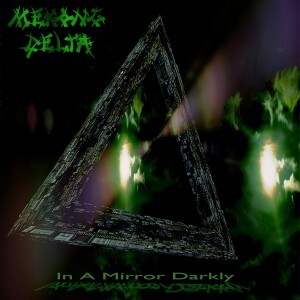 Welcome back to Heavymetal.no! How’s life?

Alex: "Hi there! Good to be back with you guys! Life is great, I’m a soccer fan, so on top of al the exciting music things in my life I’m really enjoying the World Cup right now."

Erik:  "Hahaha, Alex. Finally we're missing the Scandinavian teams. And some other big European teams had an early trip home... But beside this - yeah, life's good."

Ralf:  "Soccer World Cup? What is that ? Did I miss something important without that 22 millionaires running after a ball like in Roms old Coliseum? Panem et Circenses?"

Must agree with Ralf on this one, sorry guys :)

Your last album won me over, 'In A Mirror' is somewhat different, do you agree? I still like what you have to offer, but there has been some development...?

Erik: "Yes, it is different. And this is good! Mekong Delta will never be a band like for example AC/DC. If they would change something in the way they compose their Rock'n'Roll songs it would be a catastrophe for everybody who likes to listen to the bands typical style. In our case you can hear all the development from record to record. For Mekong Delta it's very important to have an progression in the way Ralf composes and the way we arrange and express the composition as a band. But if you be honest – to all differences – even you have recognized Mekong Delta from the first note by typical sound and melody designs, don't you?!..."

Yeah, but I do feel the last albums have made their own path as well, but the musical fundament is the same. The vocals and the production I guess is two factors contributing to the difference, but the basics are present for sure.

Les anmeldelsen av 'In A Mirror Darkly' her

Since the revival of Mekong Delta, what have been your favorite moments?

Alex: "Well, definitely some of our festival shows stood out for me. Especially ProgPower Scandinavia but also Hellfest 2011 for example.

Erik: "Yes, those festivals, and having the Wanderer an the Mirror albums as vinyl on the shelf..."

Do you feel the band has reached a new level? That Mekong Delta can function as a fresh band rather than one just looking in the rear view mirror? A lot of bands struggle with this, that their past haunts them and makes looking forward difficult. Everyone just want to hear the classics etc.

Alex:  "I believe that the fans are embracing the fact that, for the first time in Mekong Delta’s long history, there is a really stable line up since 2008. In this regard I think we definitely functions as a fresh band. Of course people wanna hear the old classics, but I take pride in playing them so that’s no problem to me."

Erik: "Due to the really special kind of music Mekong Delta plays, I believe that our fans and listeners matured with us and our music. With the re-recordings on Intersections we would like to show that we're able to play the 'god old stuff' in our personal and special way like a fresh band does. But we also had some critics of fans who are more into the old recordings. But we don't struggle with this. We love to play this. It's an honour!"

When looking at the album from a distance, how do you view it compared to the old stuff? Generally I would say the sound and the songs aren't too different from the vintage material, perhaps a slightly improved production and vocals? Thoughts?

Erik:  "Oh no. You're kidding. (Ey, Mekong Delta were sarcasist towards me? An honour :). Because of technical possibilities we use today I believe – and can hear - that the sound has become much better. To be honest - we're still not satisfied with it but we go for. Martins voice touches me at least in the same way as Keil did on the first albums. But Martins work fits much more into the composition as Keil was ever able to do. And the songs as well are totally different because of the melodic composition Ralf does today. Certainly the structure of our 'rock' songs with the vocals is close to the way an average musician would use to write it, e.g. intro, verse, bridge, verse, chorus, melody part, etc... But if you listen to the Overture or Inside the Outside of the Inside you can figure out that nobody did a track like this ever before."

Is it a strong interest in the band these days? When the promotion starts, are the interviews pouring in or do you have to work in order to get on the covers of the metal magazines?

Erik:  "Yes there is a big interest of all media today. Ralf is really busy with all the interviews and to satisfy the worldwide demands. But the main work to get an order and to stay in peoples mind is the part of Steamhammer and SPV. We personally are not trying to get onto some metal magazine covers. We even don't have a proper promotion photo, hahaha..."

Whats in the mirror? What is the main story behind the album?

Ralf:  "This is quite hard to explain, especially in a for me foreign language ( difficult enough in german). Lets try it this way. A Mirror Darkly is the exact opposite of that what you are normally doing, for example, if you never hurt someone as a principal of your way of living, your reflection in a mirror darkly would be that you start beating people. Or if you are living in a Democracy, the dark mirror could be e.g. Facism. In A Mirror Darkly points to the negative aspects of that what you think is positive."

Thanks! Appreciate this one...

Do you find it hard to recapture the material live? Is it difficult to play the songs and transfer them to the stage?

Alex: "It’s sometimes difficult but not so much for the playing part as for the orchestration. Meaning that sometimes, due to Ralf polyphonic way of composing, you have to make choices as to what guitar parts you play. We don’t limit ourselves to having only two guitars audible at all times, so naturally it’s sometimes harder to pull the songs off live." 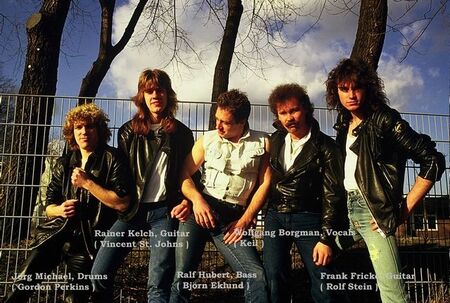 Mekong Delta has always been an avid user of acoustic guitars, do you have any classical training?

Ralf:  "Classical guitar was and is my main instrument which I started playing at the age of 13, this after a holiday to Spain where I was deeply impressed listening to a flamenco player, bass I play as second instrument. I spent a short time at the conservatory to study guitar, but after I noticed that my passion for modern classical music was not supported the way I expected, and than noticed that they try to push you in a way to interpret music they think is the right one, I left. Don't need someone who tells me how to interpret for example Rhawstorne on guitar, know that best on my own."

Sometimes I feel your choice of melodies are kind of soundtracky, a dark horror vibe. Are movies an inspiration? And do you agree on my observation?

Ralf:  "Then the intention is reached. Don't need a film movie for inspiration, every song projects its own movie in my head. If you took a closer look on film music, you will notice, that this is the only area left where composers use ( or can use ) expressionistic or late romantic ways to underline what happens on the screen. As Mekong uses variations of this kind of composing, it seems obvious that you get this feelling."

Are you happy with the sales on the last album? 'The Wanderer'? As many bands have to tour to make money these days due to poor cd-/vinyl sales, can Mekong Delta survive economical?

Ralf:  "Believe me, most of the groups which are in a state like Mekong Delta will not earn money from a tour, they will pay on top. For Mekong its a bit different as all of us have a lot of music jobs beside Mekong, e.g. Alex with Rhapsody and teaching, Martin with Nachtgeschrei and teaching, Erik got his studio, an own music school, so, yes we can survive. Intersection was not done to make profit ( even if we did, we got a lot of new fans, and that is worth more than everythimg else ), the idea was brought to us by our fans as they like the way the actual line up interpretes the old stuff.

The music is progressive, classical, thrashy, technical. What bands and composers inspire you? Mekong Delta has always stood for inovation, this mainly because of the broad musical approach, and a lot of the material has inputs from other sources than metal.

Ralf:  "Actually no one, otherwise we wouldn't sound unique. If I have to go for my musical roots I have to mentioned Shostakowich, Prokoview, Wagner, Britten etc. from the classical side and early Yes, Genesis and E, L & P from the rock side. Not to forgot all the composer who wrote pieces for the classical guitar, there I would say everyone, starting with Dowland over Sor to Walton."

I really appraciate you taking the time to answer my humble questions, hopefully I will catch you guys live, and perhaps meet in person! :) Any last words to the readers of Heavymetal.no? Why should they buy your album?

Alex & Ralf :  "Thank you for your questions. To all our fans in Norway, I want to say thank you for your support. You guys have a great scene with fantastic Norwegian bands as well, so don’t forget to support your own folks. I think anyone into challenging, Progressive - in the original sense of the word - music, should give a listen to our new album. If you want to hear something completely different, listen to Mekong Delta."

Erik: "Yes, it would be nice to play for our fans in Norway again. And don't be afraid to listen to the new stuff. The common ground of the worlds press and online media is that we created a strong red line for each song and the album in total. It's much easier to listen to the Mirror album than it was to them before. I thank you for taking your time."