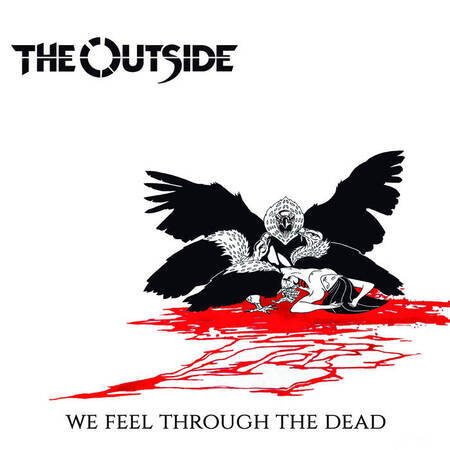 Alberto: "Hi, everything cool here, thanks. We released our third album last september, with a new line up and we are very happy how everything is developing now. We would like to play more but having almost all members living in different countries makes it difficult. Still we managed to book some shows for the first half of 2019."

Roland: "Thanks! We're glad that you're having us! For me, life between Buenos Aires and Berlin is pretty good actually. But I am one of the fortunate. I see that in South America a lot. How's Norway though? Last time I was there I froze my ass off. But I know, I know, it's what I should expect going there in January..."

Haha, yeah, I do love the cold though, chose t-shirt in minus 8 celsius not too long ago :)

As you guys are an unknown band for most of the readers, some fast food facts may be a good way to kick off the interview? Age, origin, what you have released this far, when the band started etc.

Alberto: "The Outside started sometime in 2008. Sergio Klein (former guitar player) and me played together since our school years in Chile, in 2006 we moved to Germany. After a couple of years of failing to find members for our metal band, we found Roland on Myspace. We contacted him and started The Outside with old songs we had, rearranged that music basically. Roland added his lyrics and vocal lines and we renamed the project to The Outside.

After some shows we recorded our first demo in 2009. 2012 we released our self titled debut album, the second one, Dawn of the Deaf, in 2015. We played a lot of shows during that time, all over Europe, some shows in Scandinavia and did even a small tour in South America. In 2016 we parted ways with Sergio, who is playing now with Criminal.

When I heard that Ricardo was coming to live in Europe I asked him if he would join us. We had met him the first time on the Dawn of the Deaf Tour in 2015 as we toured together with his old band Timecode. As you can clearly see, he said yes."

I really liked the album, it had this dark groove, technical skills and the monotony beneath it all. If people ask, how do you describe your band, your album?

Alberto: "Thank you, that is more or less what we had in mind when we started doing the album. I wanted to put a negative feeling to the songs, something we hadn't done before, more space for the vocals and in general. Repetition and monotony plays a big part in this, that was a way to get a doomier sound, heavier, uglier, more direct than the first two records that are very guitar oriented and thrashy."

Ricardo: "This album is a mix of different styles of course, it is what we wanted to show according with things we want to say in our lyrics. So it is difficult for me to say which kind of metal we perform."

Ishay: "With the new direction of the music we wanted to take the outside to a more raw and dark sound and composition. We tried to stay clear from obvious melodies and ended up with a tone that we can only describe ugly, authentic and mature type of metal. We are not trying to be nice and enjoyable for the listeners, but more to have the music describe the feelings one should have while reading the lyrics. We are not a happy band."

And inspirations, what are the main influences for the music of the Outside? And do you share these inspirations? Or are the members very different in musical taste?

Ricardo: "I do not only feel inspired by music, it can be influenced by daily life and feelings I have in a certain moment. And about other bands which inspired us I can say that Morbid Angel, Candlemass, Gorefest, At the Gates, Ministry, Paradise Lost and Nevermore are some of bands we like."

Roland: "We like metal, within these limits all else are nuances in my opinion. As long as it has distorted guitars and generally a dark vibe to it, it influences me. Take our latest album We Feel Through the Dead for example: It was interesting to see that despite being from Chile, Israel and Germany, we agreed on which vibe we would imagine the album to have pretty quickly. I am really happy with the album."

What made me like the band even more, is the fact that you have made an album, not just a bunch of songs – it is a wholeness to it. And for me that often tends to be what I like, when an album is played through and you feel the totality. Thoughts?

Alberto: "At the beginning it took some time, and wasn't easy to get the right feeling and the style for the album. Luckily, at some point the switch flicked and all the ideas were more clear. We changed some stuff in the songs, arrangements, and more. Ricardo was sending me riffs almost on a daily basis and we got the album done in some weeks. It just felt right. I still try to take some time and hear whole albums like I used to when i was a kid, a really nice feeling."

Ricardo: "I think this album has its sequence of songs and its own energy in all of them because of its writing process. We worked on it in a short period during 2017."

How is the business deal of it all? Label, promotion, gigs? Is it easy for you guys to get your stuff out there? Today, with the insane amount of music released, it’s almost a lottery for one to get through. Especially with a band like The Outside, not having a known member, or something easy for a label to sell.

"We released the album via Green Zone Music and Metropolitan Edge, our own label. everything is almost self-made. Green Zone Music and Gordeon Music were in charge of the promotion. Gigs we book ourselves mostly, besides we work together with Rotten and Poor from Berlin and Ferroda Booking from Chile.

Sure, it is very difficult to sell the band, but that is not the main goal for us. We just want and need to make music and we will do our best to get things done. The problem is that now everything is really expensive (laughs). Support tours, promotion, et cetera. Especially if you are paying everything yourself."

Roland: "To be honest we don't make any profit at all with the band. We do it because we need to. Actually I would like to object your statement a bit. Easy to sell also depends on how much you invested before. For us, the best investment is writing music we like, to learn and progress on the way and publish it for everyone. If I listen to our three albums, and see what we do on stage, I can clearly see that. But I personally agree that it feels a bit like a lottery."

Lyrics, you’re a political based band? Isn’t that right?

Roland: "That's right. It turned out that way over the years. Actually we never sat down and decided to write only lyrics about politics. It's just what we see, read and hear on a daily basis where we live. Not just, but everyone in a way cares about politics in a certain way, because it is about freedom and power. Power is wealth. And wealth is power."

And what themes/topics are the main influences on your lyrical work?

Roland: "The abuse of this power. The ignorance of those who decide about us by just thinking about themselves. About feeling the anger of Us vs. Them instead the positive empowerment of Everyone with Everyone in our societies; even more so in a globalized world."

Ishay: "We try to listen to the message behind the words of politicians and Fake News. To understand that many organizations have their own interests even if they are hidden behind nice words and pretty pictures. Some are more extreme and damaging than others, and one should never blindly believe anything. That's the meaning for us of being in the world, seeing it for what it is and choosing what to support and what to oppose."

Are you a political band using the music to get the message through? Or a band with political lyrics, where the music is the most important?

Alberto: "We are a band which has political content in the lyrics, but we are not here to teach people how to think or whatever. It is just our form of expression. Some use Lovecraft, beer, satanism or whatever. We like to say what we think, where we stand as people, but music is first."

Ishay: "I believe in our case they are both equally true. Both the music and the lyrics are open for scrutiny and criticism from all members of the band, and we often change the music or lyrics based on members' input."

I believe you’re located in Germany? Berlin? Did you choose to locate the band here due to any specific cause?

Alberto: "We all came here for different reasons and in different years. Roland came here some years before me and Ishay some years after me, Ricardo is the only one who has never lived here. I can't imagine another city in Germany where you can meet so many metalheads from different countries."

Roland: "Because it might be one of the best cities in the world! But seriously, nowadays it's an international city, you can make a living and invest a certain amount of time in your own music simultaneously. But globalization catches up here, too, and rents are rising like hell. Still, Berlin has always been a good home city for The Outside."

Ishay: "Berlin is nowadays a great city for musicians, and all the band members except Ricardo chose to locate to the city on their own. We all met in Berlin, even though some of us don't live in the city at this time. It is very heart warming to see that the band keeps making progress and being active despite the big geographical distance between the members. Ricardo lives in Prague and Roland in Argentina for two years now."

I really appreciate you taking the time to hang out here @Heavymetal.no. Any last words? Greetings, angry messages, love, anything? Where to buy your cd perhaps?

Roland: "Of course we appreciate everyone who sends us a message, who attends our shows, comments on our music, or buys our stuff. If you want to order directly from us, you can do that through Bandcamp or at our shows.