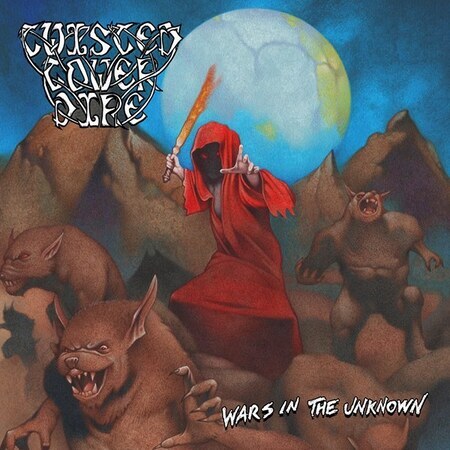 I did follow the band quite a bit back in the mid 90’s, believe I ordered the 'Triumphant' demo from Scott and even had an interview in a metal magazine when 'The Isle Of Hydra' was released. This is suddenly a long time ago :) What’s it like to be a part of the metal scene today? After all these years?

I guess people will question the years between 'Make It Dark' and this new one, I won’t. Things happen, life. But it is a different scene now, the interest for the classic underground scene has grown. Will the increased interest be a benefit for TTD? Or are the zillions of bands something making it harder to get seen/heard?

"It's harder for us to work together because everyone in the band is spread out geographically. Life certainly gets in the way too as we all have careers and family and such. Scott, Jim & Jonny did the Walpyurgus album in between MID (Make it Dark) and this one. Dave and I also have releases that were recorded in this gap that have been or will be released in the near future. I suppose I'm answering the question you didn't ask.

I certainly think we fit in with the modern metal scene. That fact that people remember us from our previous releases certainly helps. I don't feel that we are starting from scratch or anything. We will do what we have always done. Make the best album we can and hope that people like it."

What’s different this time around? Musically? It was a leap from 'Hydra' to 'Crest', and from 'Netherworld' to 'Make It Dark' as well (I feel).

"We sort of learned to write songs as a band (with a full time singer) for the first time on Isle of Hydra. We reached a high point with that song writing on Crest of the Martyrs, but we went with a production aspect that some of us were questionable about. Crest sounds great and we knew we were gong to get those huge chorus' working with Piet, but I'm not sure in the end it's what we wanted for those songs. Almost as a backlash to Crest we recorded Netherworlds. It's a dark album that seems to almost go back to our first album (Cures of Twisted Tower). It's similar to Crest in that there are a lot of riffs in all the songs. 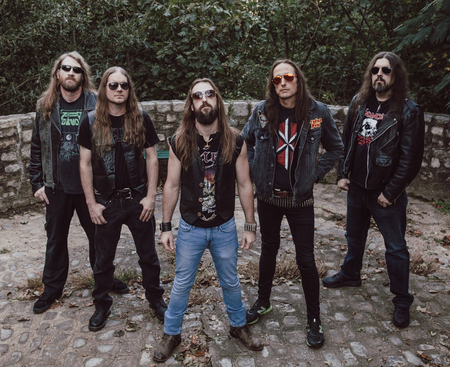 We also didn't get as much input from Tony on that album as we did on the previous two. Between that and Remedy giving us essentially no production budget we were left with an album that represents a bit of a rudderless ship. I love Netherworlds, but it represents a dark time for us that we barely made it through as a band. So I suppose as backlash to Netherworlds we wrote Make It Dark, which to us is a Rock & Roll record. It was written to be more of a party album than a dark brooding thing. I suppose the new one (Wars in the Unknown) falls some where in between Make it Dark and our previous albums. I think this album is a lot more aggressive than Make it Dark. Hydra and Crest both have a thrash aspect to them them I don't think Make It Dark had. This album definitely goes back to the aggressive style we had previously, but we tried to keep some weird Blue Oyster Cult-ish themes running lyrically that started on Make it Dark."

How was the studio experience? Was it all in, live, sweat? Or a matter of the new age, sending files and ending up with an album based on a fragmented process?

"We actually started recording this one in my basement. Well actually we recorded all of this in one of our basements...

The album started with Dave and I working out songs that Dave had written. As I have a recording setup in my basement we built all the songs off of those demos. If you go back far enough you have the horrible recordings of Dave & I with too much beer in our bellies doing the original tracking. We were lucky enough to be able to give it to Kevin 131 at Assembly Line Studios to mix and master, and he did a fantastic job. Kevin also did Hydra, and I've wanted to do everything with him since. He did a great job on this one. I think this this album sounds the way Crest of the Martyrs should have."

Is it easy/easier these days to get coverage in the media? A decrease in printed mags, the online jungle is crowded, thousands of new bands.

"No Remorse Records is helping with that. I wouldn't know where to start without them & Sure Shot Worx sending people to us. We'd probably just sit on the album and no one would ever know it existed. I suppose this is a way in which the scene is no longer like it was. Used to be if you could get in a few mags but that was HUGE exposure. Now you get covered a lot more, but it gets lost in the internet."

You’re an American band, but I guess it is still Europe fronting the classic metal? You guys planning a raid over here? Or is it too expensive to tour outside of the states?

"We certainly want to. We are working on some things, but it is expensive. It costs as much in time as it does in money and no one in the band has much of either these days. There is nothing we would rather do, it's just a lot to work out. Still some seeds are being planted that could grow into another European invasion."

Management, booking, how much support do you have? Still doing a lot of the work yourself? It’s easier now, of course, with the internet and all, one can achieve a great deal without engaging external support.

"It would all be internal at the moment, well us and the people supporting the album......Seeds are being planted........We would certainly need help from some other people to go to Europe again."

"I think this is the best album we've ever done. Period. It's the first time where the song writing & production are perfectly in line with each other. We've been around for over 20 years now and if a band lasts that long and people still care about what you put out.......We must be doing something that people want to hear."

The cover. I always felt TTD has lacked some weight in this department. The one biiiig exception is Make It Dark, an incredible piece of art. The new one, it reminds me of the debut I fact. What’s the story behind the choice of cover? And any message behind it?

"We started writing an album about World War 2 and quickly realized that we didn't want to dedicate and entire album to that or make a concept album. We then started veering into lots of Lovecraft-ian, Blue Öyster Cult, Edgar Allan Poe type horror/science fiction stuff. But we already had the WW2 themed songs, so we decided Lets combine the two and make this album about battles and things in the unknown.

I believe the first title suggested was At War With the Unknown, but landed on Wars in the Unknown. We gave the title and subject matter to Martin (Hanford). Martin has done all or artwork except for the 1st Album (Curse). I'm glad you liked Make it Dark. Martin gave us a bunch of black & white artwork for that album and my wife did the coloration for the cover."

I really appreciate you taking the time to visit Heavymetal.no, which has served as a major metal force in almost twenty years. Any final words to the readers? To Norway ?

"Thanks for supporting us. Hopefully sometime soon we can make it there! I've always wanted to visit that part of the world but have never had the opportunity. Hopefully one will arise soon."