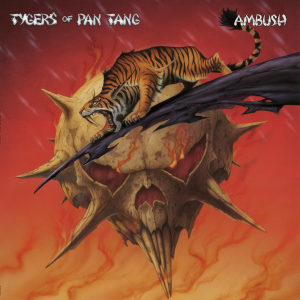 "The Nwobhm missing link, one of the bands that started out the style, together with Iron Maiden and Saxon. In September we re-release their 2012 album Ambush with bonus. Cruel Hands Of Time is precisely an unreleased studio out-take this re-release will feature."

Gitarist Robb Weir: "Everything has a time and a place, and  for this little gem both have arrived.... All rise and prepare to rock out... We give you,  Cruel Hands of Time."

"It’s a cold day in Kent in 2012 and Tygers of Pan Tang have convened at Ecology Studios to record their new album. No one could have realised that this would be the last recording to feature guitarist Dean Robertson. Neither could the band have guessed that it would be
the last time that they could work with a man who had been involved with them since the very beginning - Chris Tsangarides. Chris was such a totem to the band that vocalist Jack Meille has commented, I was so excited to meet and work with Chris Tsangarides. The week I spent in the studio with him marks a landmark in my musical career. Chris made me feel so comfortable and allowed me to discover the full potential of my voice. Thank you Chris, this remastered version of Ambush is dedicated to you!"