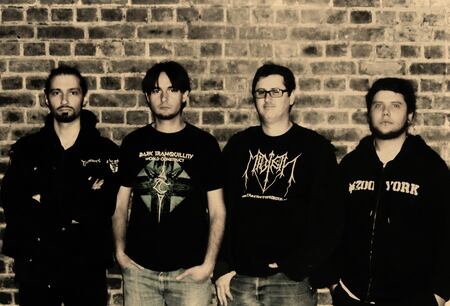 Holyv (guitars): "Hello! Things are getting pretty well, our new album has been released in April by Mighty Music and the feedback is very encouraging. We also rehearse with our new drummer Dany in order to play live soon."

I was impressed by your last effort, I Fell Nothing. What made you choose this kind of metal? The melodic, aggressive yet melancholic style?

Holyv: "Obdurated has always been a melodic death/thrash metal band. Through the years we’ve been incorporating more and more melodic elements and stuff from Heavy 80’s and Thrash 90’s. That’s why you can find more lead guitars, solos, samples, keyboards etc. That change isn’t really a deliberate choice; I think it’s our natural evolution as our style becomes more personal with time."

I know, mentioning Gojira and Dagoba is rather a cliche, and yes, I know they were noted in the press release :) But again, people need some tags, something to use as pointers. Do you feel Obdurated is close to these two bands?

Holyv: "We can certainly find common points with Dagoba: heavy guitars, thrashy riffs, samples and keyboards... I personally like this band but can’t say it’s one of our influences. I also appreciate Gojira but I don’t think our style is similar to theirs."

Deke (bass, vocals): "There’s unfortunately confusion in the promotional booklet. We haven’t any direct influence from these bands, we just opened for some of them on some live shows, and that was a long time ago."

I am a big fan av collector of the nwobhm era, and was thrilled to see this wave as a referance in the press release. But I didn't get any strong vibes during the time I spent with the album. Are you big fans of this era yourself? Or is it just a matter of being inspired by Maiden and the known bands?

Holyv: "I’m definitely a big fan of bands from the NWOBHM, and more generally of heavy/speed metal bands. So is Deke and that’s why we recorded cover songs of Iron Maiden and Helloween in our previous EP The Covers Within. I think you can feel this influence in some lead guitars, solos and in a few epic choruses."

The production was very suiting. And very distinct. I really loved the clean cut sound, where both the moody stuff and the hard hitting riffs got equal space. This combintaion was awesome. Was the result better than the expectations when entering the studio? And how was the studio experience?

Holyv: "As for our previous album, The Answers Within, and for the EP, we made the recording by ourselves and the mix and mastering at the Damage Room Studios (US). We are once again very satisfied of the result: a powerful, modern and clean sound that really fits to our music. The recording planning was a bit hectic as we all live far from each others, and thus took more time than expected. But we made it in a reasonable amount of time and could have the mix and master quickly achieved thereafter."

I red some of the lyrics, but I didn't really found out what you wanted to say. Is it a particular topic/view you're fronting?

Deke: "There’s no main line in the lyrics of the album. No particular topic, unlike on the previous releases where we talked about our society. Writing lyrics isn’t our main motivation actually, we prefer mostly working on composing music, which is much more interesting to us."

You guys (and girl :)) do a lot of touring? This kind of metal usually works well in a live situation.

Holyv: "Well now you can just say guys as Pauline left the band, the bass is now held by Deke. We’ve been doing quite a lot of touring a few years ago; then due to line-up changes we set this activity in stand-by. But as I said earlier we are working on playing live again soon. Usually we have a good reception from the audience during shows, I think that style is kind of made for the stage!" 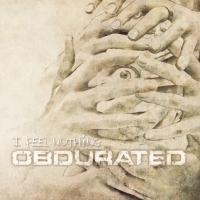 The band started out in 2001, and I fond out this is your third release, plus you have an ep as well. Are the early stuff similar to 'I Feel Nothing'? And this ep, a cover release, what bands did you focus on?

Holyv: "The early releases are a bit different, more influenced by hardcore and metalcore, no samples nor keyboards, few lead guitars… We kept the aggressive and direct aspect of the music, but added more melodies and atmospheres to our compositions. The structures are also getting more complex and the music is globally richer. Additionally to the 2 bands I mentioned, the EP includes covers of Carnal Forge, The Haunted, Heaven Shall Burn and Machine Head."

What made you go danish when securing a contract? How did you end up with Mighty Music?

Holyv: "We had a few other answers from French labels, but our experience with our former label from France made us tried to work with a foreign one. We are satisfied of our collaboration; Mighty Music gives us good promotion, distribution, and feedback from the press."

As you are in Norway, digitally, what bands do you like from the norwegian shores?

Holyv: "I am probably the only one in the band to listen to black metal; I really like Emperor, Immortal, Keep Of Kalessin and many others!"

You know, Norway is far more than black metal ;)

And are there any french bands we need to check out? Perhaps some smaller, great bands?

Les anmeldelsen av 'I Feel Nothing' her.

Holyv: "There are definitely good bands in France, in very different styles I like for example Adagio, Benighted, Anorexia Nervosa, Hacride…"

I really appreciate you taking the time to answer my questions, thanks! Any final words? Someone in need of a good slapping? Someone important to the band who deserves a mentioning?

Holyv: "I will just thank you for the interview, we really appreciate! And thanks to the people who will read these lines for their interest in Obdurated, we hope you will enjoy the album, and maybe see you soon on stage!"